Registered User regular
January 2011 edited January 2011 in Graphic Violence
Are you a fan of art AND narrative?

On this subforum, I've seen a lot of threads about characters, plotlines, and genre's of comic, but not one for ART, without which comics wouldn't exist!

I've never been a very avid comic reader because I keep finding stuff like this to not be appealing to me (design-wise and all the loud colors...).

I find this series to be endlessly unique and inspiring, and I also dig this, dark and moody.
(not just the story, but the tone of the images)

I find the typical "Super Hero" art style to be very copied and way too literal in its interpretation of life. And think that the grandiose 80's action movie cover stylings and this has been beaten to death(<<that's 4 different links - we all know luke was not that muscular)

So, lets discuss some of the more artistic comics (illustrators/graphic novel artists/sequntial artists) that are out there. (Not to say that other comics aren't good, but focusing more on the illustrations and design) 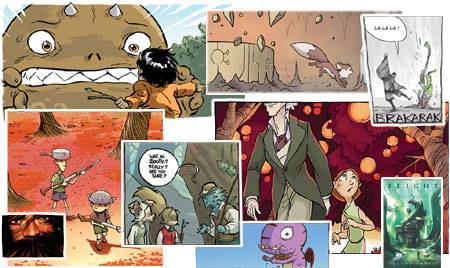