Moderator, Administrator admin
February 2013 edited February 2013 in Graphic Violence
THE PREMISE: Scattered across the universe is an army of Prophets, fierce warriors, each of them cloned from the legendary hero, John Prophet. After sleeping through the extinction of the human race, the Prophets have finally awoken en masse, and been tasked to restart the Earth Empire, by the mysterious, telepathic Brain Mothers.

Here are a few more, created by a few wonderful forumers. Vote for your favorite, and reward them with the gift of Munch-purchased comics swag.

Pherotops is a gas giant that collided with, and ultimately enveloped, a planetoid. This resulted in the world being known as the Hungry Giant. John awoke on the planetoid, and found himself unprepared for the the world of Pherotops.
Pherotops' native inhabitants are floating creatures that lack sight and hearing entirely. Instead the communicate through the excretion of gases. Each Pherotopan has a distinct odor that gives it its identity. However there are general odors that make up clans and families on Pherotops. These clans are titled Olfactions. Their lack of sight is made up for by the large nostrils on what is their closest equivalent to a head. The literally sniff their way through the gasfields of Pherotops. Soldiers of Pherotops have weaponized their biology by developing exo-bladders that emit poisonous fumes. To prevent harm from their own weapons Pherotopan soldiers also grew air sacs over their nostrils that filter their own poisons.

When John awoke he managed to subdue a Pherotopan and fashion its carcass into both a mode of flight and camouflage. As time progressed he learned of a center of conflict between the Olfactions. The properties of the combined gas giant and its enveloped planetoid created unique geysers that produced a new form of gas nicknamed, "The Fume." The Fume is an addictive substance to the Pherotopans who indulge in its scent, and slowly bloat to enormous sizes before perishing. Cartels and black markets had formed around the geysers and trade of "Bloaters" who other Pherotopans could receive similar highs from their gases.

John managed to overtake on of the Olfactions and is now a successful cartel leader of the planet. His extra senses allowed him much more maneuverability and lead him to be the most unstoppable warrior on Pherotops.

The inhabitants of the planetoid mostly take a dim view of John. Most upset are the gor-lann: after centuries of life on the planetoid, they've adapted to the magnetic field with every facet of their lives. The magnetized metallic deposits that have developed in their bodies allow them to detect minute magnetic fields, an ability they initially used for simple navigation. As their society developed, the ability to sense the magnetic fields gained more and more social, political, and even religious significance. Those who could best detect the Magnet Mother's fields - even interpret her silent messages to her beloved children - could rise to the envied rank of poet-priest. With John's emergence and the disappearance of the planetoid-wide magnetic field, the religious gor-lann have recognized this time as the prophesied Rebirth, and John Fex as the Lover-Thief of the Magnet Mother, He Who Steals the Magnessence. They are after John so they can ritually sacrifice him to their goddess in order to return to her the soul they think John took. The non-religious gor-lann don't really care about John's fate one way or the other, but their life is greatly impacted by the disappearance of the magnetic fields, and it's clear that John is somehow involved; if the priests say all will go back to normal with the Lover-Thief's death, then hey, why not give it a go.

With an entire species after him - one whose members can use their innate senses to track him - John spends most of his days on the move. While his metal skin protects him from much environmental harm, he still needs food and water. The magnetic field that his body generates is more hindrance than harm; John has no conscious control over it, and therefore needs to be careful around electronics and metal. Getting too close to a large amount of metal could prevent John from moving on, as he'd have to fight the force of the field to get away from the metal.

The disappearance of the planetoid's magnetic fields has also destabilized its orbit. John Fex doesn't know exactly what his mission consists of, but the quiet voice in his head is satisfied with things as they are. Whatever the mission is, it seems to be at the end of the planetoid's current path; he just has to survive long enough to see it. Whilst physically weaker than most other Prophet clones, due to the zero gravity environments he is built for, this John Prophet possesses psychic powers which he is scheduled to unlock as he progresses through each level of the space station. As his powers awaken a third eye will begin to emerge from the wound on his forehead.

The station has been taken over by animalistic subhuman offspring of the original science crew. The original plan was that John would awaken to a fully functional space station crew who had been preparing to aid him for generations, however something went wrong. Are the Thelurians so far gone that they can no longer be considered viable humans or will John Prophet find a way to make an unconventional army out of them? 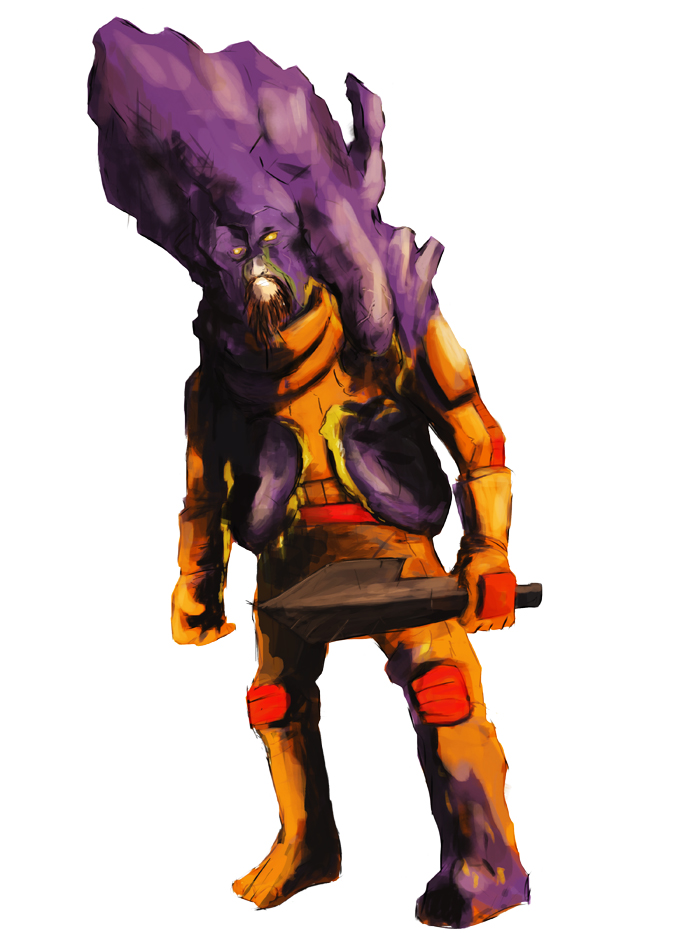 This clone of John Prophet was tasked with the rescue of the heir of an endangered, sentient species-a paternalistic race of highly adaptive chimera, part reefspawn, part termite mound, part...something else.
The spawn king can restore the ecosystem its offspring dwell in, but can also rejuvenate dying life. John found the king, but in the process of escape ended up forced to break the stasis urn of the spawn in an effort to save his own life before succumbing to toxic poisoning.

The spawn has heavily modified John Prophet's lungs and grafted itself across his back, and over the course of their journey has helpfully closed off injuries that might otherwise prove fatal to its carrier...but the symbiosis is having an undeniable effect on John Prophet.

John's head is trapped in a massive growth now, and his mind is in direct communion with the spawn-king's thoughts and desires. He no longer eats, or sleeps, or tires in any way, but relentlessly climbs and walks, the towering growth of the spawn king rising over his back and causing him to hobble with a disturbing gait. The spawn king has promised him freedom once they have reached the creche of its offspring, but every day, John can feel himself changing a little more, and wonders what will be left of himself when his task is done.