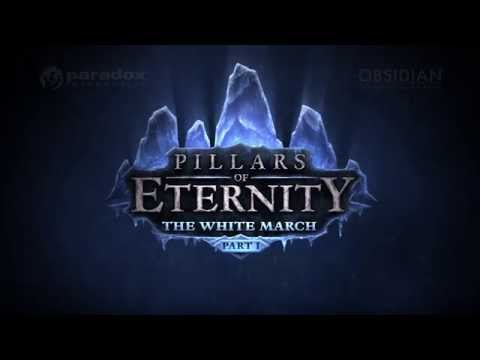 Pillars of Eternity is a fantasy isometric pausable real time party based RPG developed by Obsidian Software, makers of such fine games as the best Knights of the Old Republic game, the best recent Fallout game, the best Neverwinter Nights game, the best South Park game, and the best Fallout DLC. And Alpha Protocol. It aims to recapture the best parts of classic RPGs of the past, like Baldur's Gate, Icewind Dale, and Planescape: Torment.

It's true. Pillars of Eternity is old school. Combat is tactical and pausing is encouraged (and probably required in tough fights). Use your party members effectively by synergizing spells and abilities and making other good decisions. Pore over deflection, damage reduction, and status effect statistics to devise the most effective strategies to take on a variety of enemies. Creep through ruins, detect traps, solve puzzles, read a lot of text.

But the game is not just a slavish recreation of the old sort of game. There are all sorts of quality of life improvements. Inventory management bullshit is entirely missing, unless you turn on the option to restrict stash access. A lot of fiddly mechanics and unintuitive things from D&D (THAC0, anyone?) is gone - the game has been designed from the ground up to work as a fun, well-balanced, tactically interesting computer RPG.

Interesting new mechanics, like engagement, which allows melee characters to tie up their opponents in combat, and a simplified way of handling hits and crits, help make the game fun, fresh, and challenging.

Non-combat skills for each character are handled separately from combat skills, meaning you don't need to cripple a character in combat to make them effective outside combat, and vice versa. Josh Sawyer, the lead designer, is all about making choices interesting and meaningful and providing options rather than punishing players or letting them easily fuck themselves over. All sorts of weapon loadouts are viable - instead of being better or worse, weapons differ in the sorts of damage they inflict, the speed at which they attack, and so on. Here's a chart about the weapons I stole from the Something Awful forums.

Every once in a while you get a sort of "choose your own adventure" sequence, which is a bunch of text with some pictures to look at. During these sequences you get to make various choices which often involve a skill check or something. These add flavor, story, and additional options to the game to break up the gameplay, which is otherwise a bunch of running around, talking, and fighting.

Let's start with character creation. There are six attributes: Might, Constitution, Dexterity, Perception, Intellect, and Resolve. The interesting thing about these attributes is that they have the same effects on all sorts of characters, meaning that Might increases damage for everyone, not just characters who fight in melee or something. If you want your wizard to do lots of damage, give them more Might. Intellect increases the area of effect and the duration of abilities, so if you want your barbarian's yells to have a larger impact, give them more Intellect. And so on. This means there are many viable builds for many sorts of characters - you don't have to give your rogue a bunch of Dexterity or your barbarian a bunch of Might.

Melee engagement is another interesting mechanic. Melee characters "engage" enemies in their radius - most characters can engage one enemy, but fighters and others with special skills can engage more enemies. If you move away from someone you are engaged with, they get a free attack against you which has increased accuracy and damage. This means that you can use a fighter to tie up lots of enemies, keeping your spell casters safe, at least until you have to fight the bullshit teleporting ghost assholes.

Armor, much like the character attributes, works differently from other RPGs you may have played. Any class can wear any kind of armor and still be viable - the heavier the armor, the longer it takes a character to "recover" after they take an action. A wizard wearing heavy armor will take longer to recover after casting a spell, but their spells will be just as effective.

Attack resolution works in a fairly simple manner. Whenever you try to attack something, either with a weapon or a spell, you roll a number from 1 to 100, add it to your accuracy, and check that against the target's defense. There are four kinds of defense: Deflection, Fortitude, Reflex, and Psyche. Different attacks target different kinds of defenses - most weapons target deflection, many spells target fortitude or psyche, etc. Your roll + your accuracy minus the target's defense determines the result:

The damage an attack causes is then reduced by a character's Damage Reduction (DR) which is just a number that gets subtracted from the damage. Armor adds DR.

Characters have both Health and Endurance. Endurance is per-fight HP, so it recharges after each fight. If it reaches zero, the character is knocked out. Damage to endurance also damages health at 1/4 the rate. When health reaches zero, a character is maimed, which basically makes them useless until they rest, or killed, if they're already maimed or if you're playing on a harder difficulty.

Some abilities can be used per-encounter, others per-rest. Resting can be done in inns and can also be done by camping, which uses up camping supplies.

Therefore, resting is what resets certain spells/abilities and health, making these two things the larger, strategic resources you need to manage during a dungeon crawl.

Welcome to Eora. The game takes place in the Eastern Reach, and specifically within Dyrwood and Eir Glanfath. The technology level is at approximately where we were in the 16th century: guns exist, but they can be slow and cumbersome and if you miss the wizard, chances are you'll have a lightning bolt in your chest before you can reload. Which happened quite a bit in the 16th century.

Everyone in this world has a soul. In addition to liking soul food, this means everyone's constantly being reincarnated after death and so on. Gods screw with stuff, some people have better souls than others, some people manipulate souls with weird soul magic known as animancy, some souls fragment on death and get reborn as multiple people, and who knows what else is happening. People in tune with their souls can harness amazing powers so watch out for that.

There is political intrigue, religious fanaticism, long-held grudges, optimism about the future, and dragons. It's a pretty well-realized world, all things considered.

Right now, though, things aren't going so good. There are a bunch of Hollowborn in the Dyrwood. Who are the Hollowborn? Find out by playing the game!

There are six races you can play as in Pillars of Eternity. The various races have different sub-races, which means there are two kinds of elves, for instance: Pale Elves and Wood Elves. Sorry, that's not a lot of elves. But it's some elves.

There are 11 classes to pick from in this game. Like holy shit that's a lot.

Yeah it's like a castle. You can build some buildings and hire some guards and collect some taxes. It's alright. Here's the wiki about it.

We Kickstarted this thing to the tune of almost four million dollars, making it the highest funded Kickstarter game ever for about 10 minutes until someone Kickstarted the next Torment game. Lame. One of the backer rewards was a chance to get one of your characters into the game - if you see a fancy person standing around with a yellow name above them, that's a backer character. You can kill them and take their stuff. Obsidian later brought Paradox on as a publisher to handle stuff like boxes for store copies and stuff, but this game is mostly a result of our cash!

Font ligatures, motherfuckers! Big Heads! You won't see these in the option menu of something published by a traditional publisher.

Pretty much the first main party member you can get is in Gilded Vale - he's the dude with the portrait standing near the big tree. You can't recruit him immediately but pretty soon you can, so don't miss him. He's cool.

To set a hotkey for an ability (like a spell) or anything like that, simply hover over the ability and press the button you would like to use as a hotkey for that character. The F1 through F4 keys are good ones to use for hotkeys.

For area of effect spells that hurt everyone, the red part of the AoE marker will attack everyone, but the yellow part will only hurt enemies. The yellow part is the additional range given by the character's Intelligence.

You have to be in Stealth mode to detect traps and hidden stuff, but detection is determined entirely by your Mechanics ability - your Stealth ability is irrelevant.

Chanters can do whatever they want while they're chanting. The chants might not seem like they're amazing on their own, but remember, they're essentially free actions your chanter is taking 100% of the time.

Expert mode turns off AoE markers for spells and other abilities. Good luck with that one!

Wizards can swap grimoires during combat. Load up some books with various spells and swap them out based on what you're fighting! Or don't.

Higher difficulties increase the number of enemies and the types of enemies, but aside from Path of the Damned, they don't change the damage enemies do or anything like that.

Right click and hold, then drag, to determine the direction your formation will face.

"HelmetVisibility False", in the console, does what you would expect it would do.

At Level 9, 1st Level spells for Wizards, Druids and Priests change from X per Rest to X per Encounter. The same happens to 2nd Level spells at Level 11.

No sleep for the Watcher...