Something a little different this time. Understanding Comics is Scott McCloud's modern classic on comic books. It occupies a bit of a weird place in history. It's certainly not the first nonfiction comic, and not the first non-fiction work on comics. But it might be the first accessible work on the comics as an artistic medium, at a time when young fans would be lucky to land a copy of Drawing Comics the Marvel Way.

McCloud himself is one of those indie comics publishers you've probably never heard of. His main selling point aside from Understanding Comics and its sequels is Zot!, which you are statistically unlikely to have ever heard of, even if you're big into comics.

The thing about comics - and I mean both comic strips and comic books - even today there's a strong feeling that they're the domain of children, or of child-like adults. The advent of the blockbuster movies based on comic books has helped to begin to shake this estimation, but in 1993 it was still frustratingly present, despite the fact that comics have never been just for kids, and the indie comics of the early 90s were usually derived from the underground comix of the 1970s...but I digress. The thing is, when a medium is only expected for children, people tend to think of it as low-brow, lacking "higher" artistic or intellectual sensibilities - and it tends to get ignored by people as serious artwork. Lots of things not "worthy" of serious scrutiny get overlooked in this attitude; for example, people dismissive of cartoons as "stuff for kids" miss everything from the collective works of Ralph Bakshi to Japanese anime.

So when it comes to comics, the only people that took the art or writing seriously were basically the people already involved in the creative process - some of whom might have gone to art school, many of whom might not. Comic readers in particular tend to lack the technical education to comment on the finer points of comic artwork, much less put into words the connection between words and art, layout and perspective. We know what we like, and we don't need an associate's degree or to have read an art textbook to appreciate comics...right?

The benefit of an ordered study of any subject is that you can begin to appreciate and talk about that subject on many different levels. Whether you're a fan or a creator, greater knowledge of the underlying theory gives you knew ways to look at comics, and a greater appreciation both of the medium and the creators. I won't lie, when I first read this book, I wanted to go out right away and write and draw my own comic - which fortunately never got beyond a single page, because I have the artistic ability of a leprous chimpanzee. I am not too embarrassed to prove this.

So this is why I think Understanding Comics is important, as a comic, and why it was so successful, and why people should read it even 22 years later: because it is an excellent, uncomplicated, unhurried appreciation of comics for a general audience. You can give this to a snooty art professor or your artistic friend that isn't into comics or your mother who worries about the money you're pissing away on comic books, and they'll all come away with a greater appreciation of comic books...and so will you.

I'm going to do a brief recap of each of the nine chapters. Scott McCloud walks us through the definition of a "comic book," which involves a very brief overview of some of the historical aspects of the genre - this is trickier than it looks, and while an older and more well-read me would have appreciated a more in-depth look at the history of the comic book from the original "cartoons," I think McCloud does well to go for the jugular, defining very clearly what comic books are as opposed to, say, Egyptian murals or animated films. A good start, even if it gets maybe a little pedantic for the average reader.

Chapter 2: The Vocabulary of Comics The single longest chapter - and the one you usually see shots from when people bring this book up - this discusses the balance between iconic and representative art. I found this fascinating as a teenager, and even today it's a very solid low-level approach to sort of the fundamental gimmick of comics. McCloud is at the top of his game with the art, which is varied and yet distinctive - it's fun, after reading this book, to go back through and see how well-planned out each page and panel was in terms of layout and style, the juxtaposition between the simple "cartoony" narrator figure and the more elaborate and realistic pieces of art (many of which are borrowed - with permission and citation of sources! - from other comics). Realism isn't something you often think of when it comes to comic book art, but it's the beginning of learning how to think about comics in a new way.

Chapter 3: Blood in the Gutter

This chapter might be pushing the point a little, but it talks a lot about how comics are important for engaging the imagination, with readers - very unconsciously! - filling in the blanks between separate panels, implying actions, emotions, and worlds without the creators needing to actually depict that.

This chapter sort of takes off from the last one, expanding on the use of time in comics. This actually gets a bit technical in talking about specific panel lengths/arrangements, and I think I would have liked more on this, but McCloud knows his audience: it's enough to get people thinking about this sort of thing, and when you go back to reading a comic with this sort of thing in mind, you can appreciate the thought (or lack thereof) that creators sometimes put into all the things you don't know that you notice in comics, and which is what separates okay potboilers from contemporary classics. 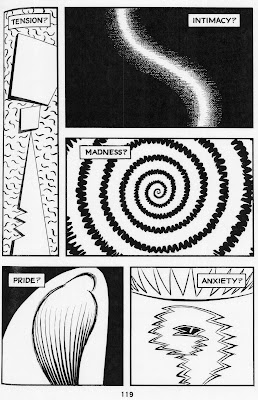 The "trippy chapter" uses some interesting visuals to discuss how comic creators give data on non-visual phenomena like emotions or smell in a purely visual medium, and gets into such fine detail as the shape and character of lines...which sounds more boring than it actually is.

I don't know if I'm doing a good job of emphasizing how the material in this book builds on itself, chapter by chapter, but this is a good example, as now that the reader has a better appreciation for what goes into the art theory of comics, it brings it together to re-examine some elements from chapter 2 about comics as the union of images and words, and discusses the balance between the two.

A discussion of the comics creation process.

In part, this is a discussion too of style over substance, or how newer comics can sometimes look better production-wise, but lack the basic attractive ideas, structure, and craft that make a comic memorable. Re-reading this today, it really brings home contemporary comics - which are often glossy, full-color, with ComiCraft handling the lettering and digital editing and...well, the writing often leaves me hollow, no matter how pretty it is. And as McCloud points out, this is nothing new: art has been dealing with the difficulty of superior technology and technique versus emptiness of ideas forever. It's not unique to comics. Which ironically helps really cement comics as a legitimate artistic medium, right?

Chapter 8: A Word About Color

Most of this book is in black-and-white, but here McCloud wants to talk about color. Because color comics are the norm today, but they haven't always been, and McCloud blitzes past color theory and delves into the history of comics coloring a little bit, like why all your old comics are spotty and printed on cheap newsprint that is softer than toilet tissue and yellows alarming. It's a short chapter, but a merry...and colorful...one.

I think this is the chapter that McCloud basically wanted to re-write when he did Making Comics, but it's sort of a summary and a culmination of the other chapters, discussing (briefly) the application of all these different thoughts on art, writing, timing, layout, color, form, etc. into a finished product. It works well to end the book, although I think I can see why McCloud might have felt he had more to say on the subject.

And...that's it. For anyone that wants to get a glimpse behind the curtain at comics without feeling obliged to quit their dayjob and start scripting or going to drawing school...or who just wants to get a start on talking a little more intelligently about comics, or to be able to nod your head knowingly when your favorite artist starts talking about things, read this book.