[Vendetta Online] The other MMORPG where you are a spaceship

What is Vendetta Online?

So, this one has been going on for a while. Its founders trace its origins back to 1998, I've been a member of the community since June 2nd, 2003. It's a twitch-based, science fiction, massively multiplayer online role playing game where you are the spaceship. What makes this title stand out so much is the combat. It feels like practicing a martial art. When engaged with another pilot, you could be fencing as a metaphor. The duel ladder uses the same ranking system as chess tournaments.

What makes it different?

There are so many ways to get into this question, but the folks over at Space Game Junkie did a fabulous podcast interview with the lead dev John Bergman last year that covers most of the nuts and bolts:

If you don't have time to listen to that, suffice to say it gets a lot of things right. Death is cheap, but your actions do have meaningful economic impact. Player guilds form alliances, businesses thrive, drama ensues (have a look at the Role Playing message board). There is a dynamic market where commodities respond to player actions; say for example that I begin trading Corrosive Chemicals between stations in a given star system: after a while my actions will cause the prices of this good at certain stations to drop, compelling me to change my route. On top of this, there is a player economy built around manufacturing (Vendetta Online's version of crafting) where credits and goods are exchanged between players to serve various needs and wants.

You can be shot just about anytime, anywhere, but there are graded levels of protection. 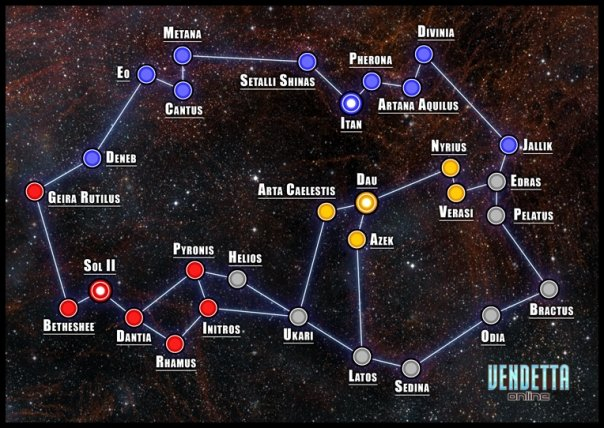 Generally speaking, the player is given a lot of leeway and consequence in making choices. If I go poking a stick in a hornet's nest, I'll pretty much deserve what's coming. If I align myself with a given faction, I will more than likely be eliminating a different set of counter-aligned opportunities. This isn't a game where one can be all things to all people. That stated, finding a groove and interacting with the community over time can be very rewarding.

There are many different resources if you are really looking to dig into the game:

Guild Software itself is a small company, so far at its largest including four people.

Yes, to a degree. Ships have mass, thrust, dimensions (hence moment of inertia), and carrying various equipment addons and cargo will affect mass. Mass considerations are huge when going into combat; as light fighters often don't pack a lot of thrust heavier weaponry will really degrade their performance although they are among the most maneuverable ships otherwise. Above certain speeds a frictional force kicks in, keeping things relatively within the sphere of playability. You can "turbo" much faster in straight-ish lines, but won't be able to maneuver.

What platforms does it run on?

It's not a stretch to say Vendetta was one of the first cross-platform MMORPGs; it made a splash when it was ported to Android back in 2011: 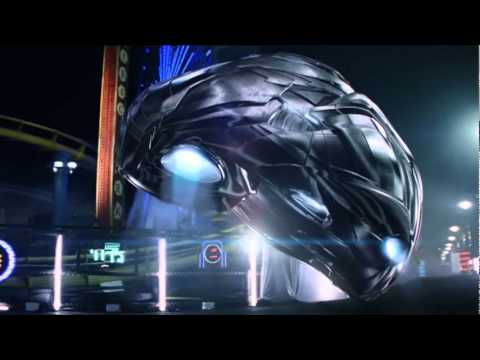 All users interact in the same galaxy. This means if I am playing on PC and you are playing on Android if we fly to the same location we will be able to see each other, shoot each other, make trades, etc. If I begin playing on an iPhone and later switch to a VR rig I will pick up right where I left off. I prefer to play on a flat screen desktop monitor (It supports Windows, Linux, and MacOS of course), but here are some of the other platforms it runs on:

Word is it runs natively on Rift, but official launch hasn't happened yet. You can download it from the main website here:

What's on the horizon for the game?

VO is not yet out for Steam, but it will be eventually. It was Greenlighted during a time when the program existed, and there is a Steam group dedicated to the game. I don't really hunt for MMOs on Steam, but I'll be sure to play it there when it launches just to interact with Steam's community. Otherwise, there are several new capital ships planned in addition to the ones that can currently be built by players. The dynamic economy is shifting toward a supply-limited model, but the devs are collecting extensive data in order to help with balance. Denser environments are in the works, including hulks of wrecked capital ships and persistent debris. An exploration expansion has been hinted at for a while. There are a lot of irons in the fire.

Overall it is a really fun experience. Like tennis or golf, it's a good mental workout and worth improving for its own sake. Be sure to say hi to me if you see me online. I am in the market for Synthetic Silksteel, and on the lookout for pirates. 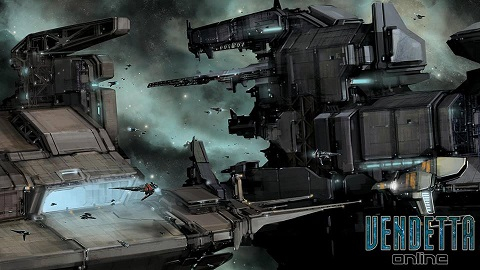