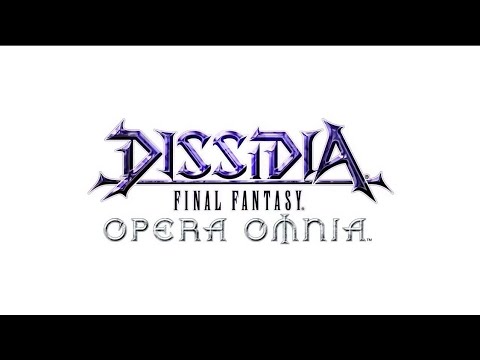 This is the thread for talking about Square Enix's mobile gacha game, Dissidia Final Fantasy Opera Omnia. Released in tandem with Dissidia NT on consoles, it is set in the same universe and uses a similar Brave/HP battle system. It is fully turn based and most closely resembles FFX's turn-based battle system, where the upcoming order of player and enemy turns is visible.

Battles revolve around using Brave attacks to steal your opponent's Brave, adding it to your own. If you reduce your opponent's Brave to below 0 they become Broken, giving your team a bonus amount of Brave. You can use HP Attacks to deal HP damage equal to your Brave to your opponents, but doing so reduces your own Brave to zero. You have to strike a balance between being aggressive and cautious; enemy bosses can accumulate very large amounts of Brave, potentially enough to kill your characters in one hit.

You can recruit various Final Fantasy characters, and each character has two different abilities. Some characters have similar roles in a party but each is unique; Warrior of Light, Galuf, Celes and Snow are all tanks, but each has very different mechanisms to accomplish their role.

This mobile game differs from most in that it does not normally use a stamina system. You can play as much or as little as you like; there is almost no pressure or requirement to play every X hours. The one exception is the World of Illusions area, which has various content farmable for leveling Summons or making Artifacts. You can also only initiate 5 multiplayer fights per day, though you can join as many as you like.

All F2P "Gacha" games have an ingame currency, and DFFOO's is Gems. Using them allows you to pull weapons from various banners, and 5* weapons enhance the properties of (or add more effects to) specific character abilities. Duplicates can be used to break the level cap of weapons, and once a fully broken weapon is leveled to max, the ability enhancements are learned by the applicable character as a passive skill that can be equipped. In this way you can get the benefits of several fully leveled weapons even though you can only have one physically equipped at a time. Think of FF9's mastery system and you'll see the resemblances.

In addition to tons of Gems, we get tons of single draw Tickets that can help prolong your stockpile. We get a very high amount of gems and tickets each month, which is great because the 5* rate is 10% and you typically want multiple copies of weapons to level break and master them. To help master things, you can sell duplicates of weapons you don't want (or fully leveled weapons after you've mastered them) for Power Stones, four of which can be used in lieu of a duplicate to level break.

You can spend real money on Gems, but it's hardly necessary. We really do get a shitload of gems and tickets through clearing content. The game does run sales on gem packages every so often and there are some reasonable deals, relatively speaking.

A word on Developer interaction; the GL version of this game has an active community rep and the dev team seems genuinely interested in listening to and responding to player feedback. Also, we are not slavishly following the JP schedule; we receive character events in better order, we've gotten more difficult content and character balance buffs earlier, and there have been a couple character polls on Twitter where the community gets to vote on the next character event. Ability names and translations have been improved by popular demand. It feels like a very healthy relationship between player base and developer base.

There's more good info and discussion available on the DFFOO Subreddit. There is also a well maintained Dissidia Database site, and a Global Tier List site. The latter has useful info on team compositions and suggestions for which characters play well with which.

@Tiger Burning has made a spreadsheet for sharing PA friend codes; it is available here.