If you immediately know the [Stargate] is fire, then the meal was cooked a long time ago 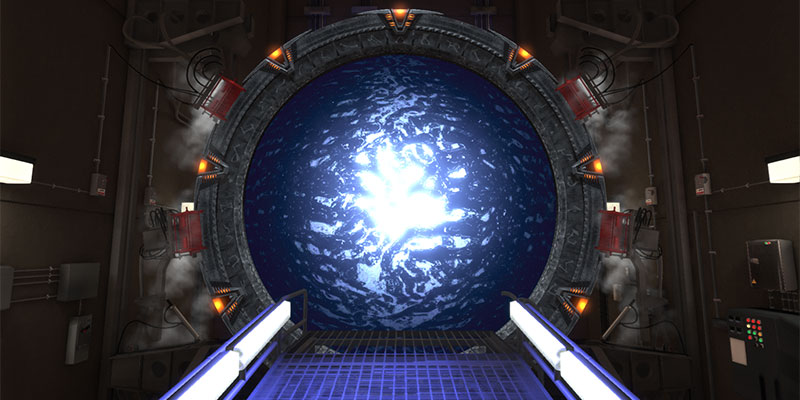 Stargate is a science fiction media franchise based on the film written by Dean Devlin and Roland Emmerich. The franchise began with the film Stargate, released on October 28, 1994, by Metro-Goldwyn-Mayer and Carolco, which grossed US$197 million worldwide. The movie stars Ego and the lawyer from Secretary, who travel to the opposite side of the known universe via a wormhole and meet the evil Egyptian god Ra. Antics ensue, they kill the bad guy, save the day, and live happily ever after.

Three years later, in 1997, Brad Wright and Jonathan Glassner would create a television series titled Stargate SG-1 that would become one of the broadest and longest running sci-fi franchises to date. SG-1 ran on Showtime for five seasons, then another five seasons on the SciFi channel. It would spawn two other live action franchises, Atlantis and Universe, as well as two direct-to-DVD movies, The Ark of Truth and Continuum (more movies were originally planned but never produced). So who starred in the show?

The main SG-1 plot revolved around fighting off a race of aliens known as the Goa'uld (pronunciation varied), parasites who could infect and control higher order beings. Although most of the Goa'uld were the namesakes fo the Egyptian pantheon, they also counted among their members some of the Greek gods, a few Celtic gods, and a handful of other mesopotamian gods (Baal, most notably). There were also a few one-offs (Yu the Great, Kali) who were minor characters borrowed from other mythologies. In addition to having genetic memory (so new Goa'uld were born with all the memories of their parents), they were, as a race, objectively Evil, although it varied whether they were Lawful (most), Neutral (Anubis), Chaotic (Baal), or somewhere in between (Apophis). The Goa'uld posed as gods but were really just sufficiently advanced aliens but were actually not even that, they were just cunning scavengers who were able to take over other races, steal all of their tech, make it their own, and then pretend to have invented it.

Eventually we learn of other alien races, like the Asgard, who had for a long time fought against the Goa'uld. Thor becomes a friend of the team, and in the end Terrans and Asgardians become a very close alliance. The Asgardians resemble the Roswell Grays, and we learn that this is due to them reproducing via cloning, which had caused their bodies to degrade over time. We also learn of another race, even older than the Goa'uld or the Asgardians, a race known only as The Ancients. We eventually learn that they are an earlier iteration of humanity that, more or less as a race, ascended to a higher plane of existence. The introduction and exploration of the Ancients adds a new layer of philosophy to the show, and we eventually learn that other races can also ascend. The transition from the Goa'uld arc to the Ancients arc is underlined by a new villain, Anubis, a Goa'uld who tricked an Ancient into helping him ascend after the Goa'uld leaders kicked him out (yes, the leaders of the race of evil kicked this dude out for being too evil. Yikes.

Anubis proves an interesting and powerful new villain, and combined with both the new philosophical edge of the Ancients plotline, as well as the exploration of a galaxy of alien races who now exist in a power vacuum after the defeat of the Goa'uld, provides a lot of new and interesting ideas for the show, and many feel these are the golden years of the series. After Anubis' defeat, the last 2-3 seasons dive deeper into the Ancients and their history, and we learn that they were not the first race to ascend, nor indeed even the first iteration of humanity, and a new race of evil demigod-like aliens are introduced. This last arc, the Ori, is often considered a post-script, as the principle lead, RDA, left the series, and much of the supporting cast was phased out. We get a new team leader (Cameron Mitchell), as well as a new quirky alien friend (Vala Mal Doran), all to compliment the all new bad guys. A lot of plot threads from earlier seasons are left dangling through this phase, though the biggest ones will eventually be tied up between the last season and the direct-to-DVD movies (which in reality were basically just multi-part episodes shot all together).

SG-1 was survived by its primary spin-off, Stargate: Atlantis, which follows a team who has found the lost city of Atlantis, once populated by the Ancients, and now an entire other galaxy. This series introduces new villains, the Wraith, and tries its best to explore some new ideas, while not being afraid to reach back to what helped make SG-1 successful. Atlantis ran for five seasons, just hitting the 100 episode mark. I will admit I didn't watch much of Atlantis, so I can't speak authoritatively to the series.

Stargate: Universe was another spin-off that started later the same year Atlantis was ended, and follows a multi-national team of much younger heroes who have become stranded, far from known space, on a ship designed by the Ancients to build and place Stargates on planets throughout space, to help facilitate evolution and exploration. The series ran for two seasons and although it had a fairly strong start and was initially well received, viewership and interest dwindled quickly, and some have argued that this shows failure may have led to the other planned SG-1 movies being scrapped (though frankly they had finished their stories, and apart from a joint SG-1/Atlantis crossover movie, they didn't need to make more).

So that's pretty much it! The Stargate franchise turns 25 today. I've tried to rewatch the series with my wife, whose never seen the earlier seasons but loved the later ones. Honestly the first few seasons are a fucking slog to get through, the show really takes a while to decide what it wants to be. It very much falls into the late-90s trap of being a "(blank) of the week" type show until the first season finale, and then taking most of the second season to really establish what it's going to be about long-term. Overall though, it's a very good show!