SniperGuyGamingRegistered User regular
November 2019 in Critical Failures
LANCER is a tabletop RPG by Massif Press. The rules are free!

https://massif-press.itch.io/ for the rules and lore supplements

Players of Lancer adopt the roles of mech pilots -- comrades together in a galaxy of danger and hope. Some groups will fight for Union, working to rectify the crimes of previous administrations. Others, for a corpro-state, working to advance private interests while lining their pockets. Yet others will fight for groups acting in opposition to those in power, or for themselves. 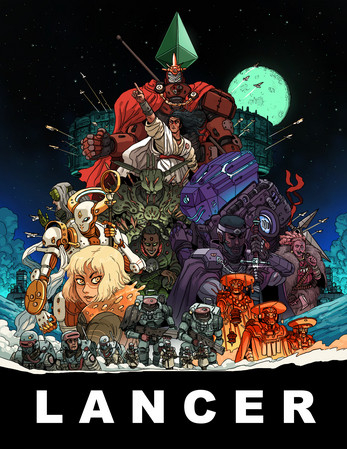 Players take on the role of pilots with Lancer Licenses. They are the best of the best, the ones who turn the tide of a battle when they drop in. Mechs are extremely customizable and varied. Want to fire missiles like in macross? Want to melee something with a giant knife like Evangelion? Want to gundam your way across the galaxy? Or do you want to get into a weird machine that is maybe more alive than not and fire paracausal ontological memetics at people? You can do that!

The setting is far into the future. Earth collapsed and sent out colony ships. Millenia later, Earth recovered and the people there unearthed vaults of old technologies, using it to propel themselves to the stars and search out the old colony ships that survived. In some cases, the new Union from earth arrived at the planets before the slower old colony ships did. In others, they made contact with the people from long ago. The Union setup blinkgates to engage in FTL travel and connect the galaxy.

The setting also features a giant terrifying deity like AI that absconded with a moon of mars. A massive monolith that teleports around whispering secrets to a civilization hell bent on reclaiming earth that was. Nomadic tribes with mysterious accents that seem to live inside blinkspace. Non-human Persons, robots that aren't AI so much as fragments of a machine intelligence that have been shackled and put to work.


I'm working on creating a campaign to stream now and am absolutely loving going through all the lore. The setting is super super cool and the customization and combat seem great. I'd recommend the Summary Lore Reference if you want to read about the lore without delving too deep into any one subject.

So, let's talk about Lancer! What kind of pilot are you making? (They've also got a great tool called COMP/CON that helps with building characters/mechs/encounters. )