Registered User regular
January 2020 edited October 2020 in Games and Technology
Thanks to Mr. Grinch's/Darmak for the original OP, I'm gonna try to improve it for this thread. Bigger, faster, less explodey. @ me for any changes or additions

Pictured above: the average VR Trooper preparing for combat.

Is My PC Up To The Challenge?
Click this link to figure out where you're at. Each PC Option will have their specific specs listed and linked.
Master PC VR requirements list

The Heady Dawn of the VR Era
It's a well established thing now. The era of home VR is upon us. Starting off with a plucky Luckey's kickstarter back in 2012, Virtual Reality has slowly made its way in to the main stream. Following a series of development kits, each increasing in quality and features, the Oculus Rift eventually launched in 2016, followed swiftly by the Vive. Lots of people argued; some citing the Vive's motion controllers and lighthouse solution to tracking as superior, others preferred the screen of the Rift and the initial focus on seated gaming, no pack in motion controllers and some exclusive content.

They're both awesome though and Oculus soon released their own expensive motion controllers which may or may not be better than the Vive's. It's sort of like discussing that this awesome chocolate cake is better than that awesome chocolate cake because it has different sprinkles though. So none of that "console war" style nonsense here please, we ain't playing favourites.

Then late 2016 Sony released the best headset, with the coolest blue glowing lights:
The VR Ecosystems Writeups
More of a visual learner? These graph comparisons of some of the top headsets may help! 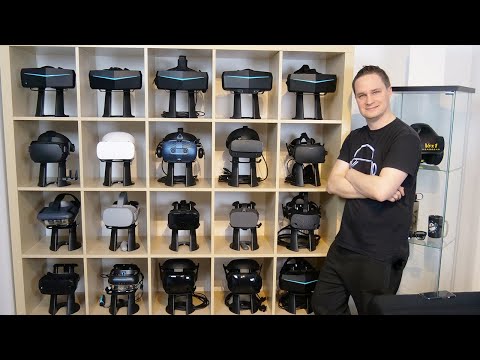 Windows Mixed Reality (WMR): -courtesy of @Apogee
WMR headsets come in several flavours, but all use the same inside-out tracking via cameras on the front of the headsets. This means they're really easy to set up (and portable, no cameras or lighthouses required) but they suffer in the tracking department. Headset tracking is great, and hand tracking is 99% so long as your controllers are visible the to the headset cameras (thankfully, the vast majority of the time). If your hands go out of view, they revert to inertial tracking only and will pretty quickly (read: 5-10 seconds later) go crazy.

Bremen synopsis:
Price: Varies
Resolution: Varies
Really a line of headsets by various manufacturers using a common standard, WMR headsets are a diverse group with varying prices, resolutions, and comfort levels. Though they're generally viewed as not quite at the level of Oculus, Vive, or Index headsets, they are reasonable alternatives and often very affordably priced, especially during sales. Features they all have in common is inside out tracking, requiring little setup (though some users report tracking issues with the controllers), and motion controllers that are generally seen as sub-par. Some headsets also feature surprisingly high resolution, which may make them stand outs for Driving/cockpit simulation games where tracking and motion controllers are less important.

A generation '1.5' headset, this is the standard MWR headset available to buy. It's an OLED display with a screen-door filter, so it looks great and has a resolution on-par or better than the Oculus S and Valve Index. It regularly goes on sale for $299 USD or less, so it's also very affordable. 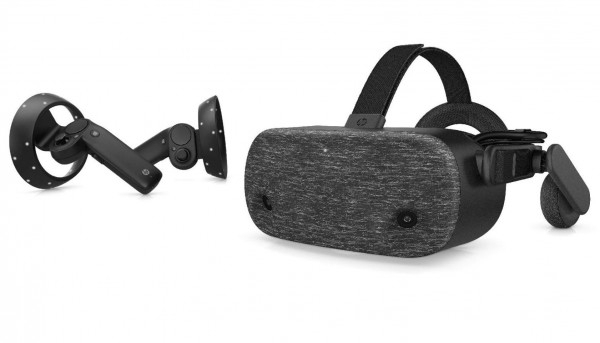 A generation 2 headset in the display department, but suffers in all other aspects. Amazing 2160 x 2160 pixels per eye means you can read text in VR like it was on a 1080p monitor a foot from your face. You can pick out planes in the sky and see distant stars. However, it has the same two-camera MWR tracking and a history of technical faults, and it's also $649 USD, so maybe wait a few months?

The Rest:
The first gen MWR headsets are all still viable options and dirt cheap, easily available for under $200 (often used for ~$100). There's HP, Dell, Acer... they're all basically the same, except for form-factor design decisions like flip-up displays or built-on headphones. The resolutions on all of them is still an impressive 1440x1440 per eye, which is better than the original Vive and Oculus headsets, but the MWR headsets use early-gen LCDs that suffer in colour quality. Still perfectly usable for almost any game, though. 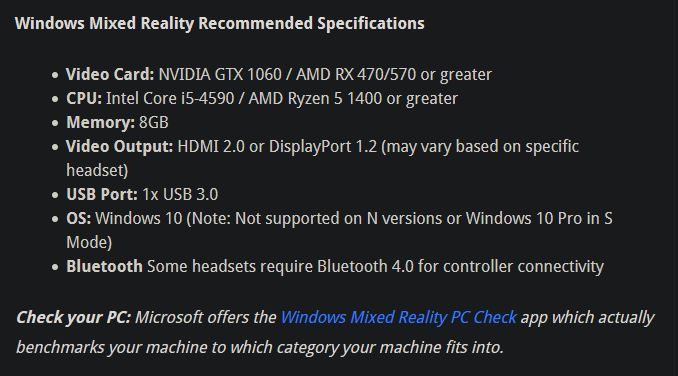 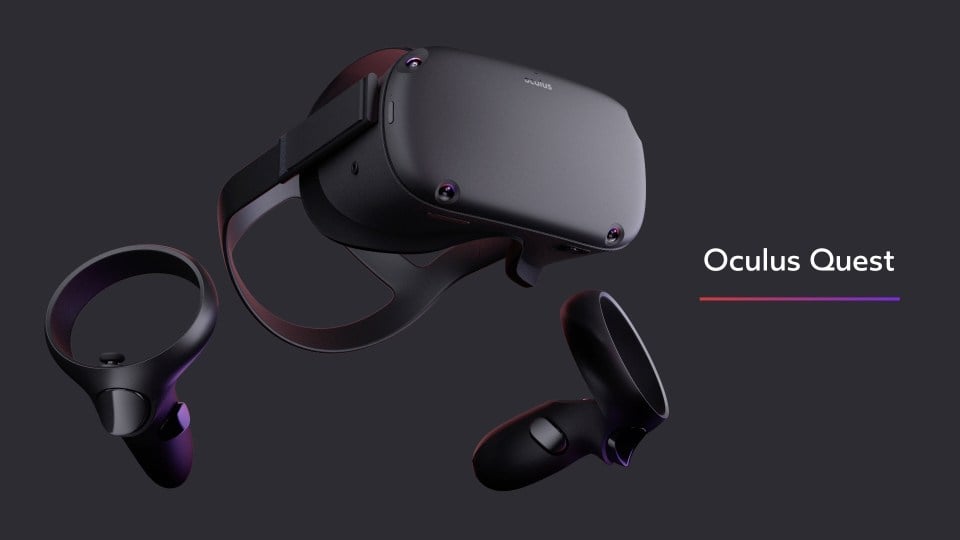 Bremen Synposis:
Price: $399 - 64 GB, $499 - 128 GB
Resolution: 1440x1600 per eye
An alternative to the Rift S, the Quest is functional both as a stand-alone system (not hooked up to a PC in any way) or connected to a PC to play PCVR games. It uses the same tracking method as the Rift S, and the two are largely comparable - though the refresh rate for the Quest is on the low side for major VR headsets. The general consensus is to get the Rift S if you'll only use PCVR, but if you have any interest in stand alone VR you're not losing much by going with the Quest. (This is me, getting ready to punch anyone who starts console war nonsense, or doesn't agree the PSVR is the best)

So this is the PSVR, it's got an awesome head band that's really easy to slip on and off, which is fantastic for when you're scared shitless in Resident Evil VII. It also works with the Playstation Move controllers, which instantly makes it better than all the other VR motion controllers because everyone of course has these to hand and there's no chance there'd be a shortage allowing for people to sell them ridiculously overpriced on Ebay. Oh and you need the Playstation Camera too. And a PS4. Actually, best make that a PS4 Pro. And a house to put it all in.

There were some doubts about the PS4 being able to pump out decent VR visuals given the relatively high spec required for PC VR games. I jest above about the need for a PS4 Pro but honestly, my base PS4 worked great and it's definitely a good experience. Sony have done a good job.

The screen is made of magic pixie dust so it means you don't see the "screen door effect" like you do on the Vive and Rift (visible space between pixels). Ok, instead you get a moire effect on dark backgrounds, but that's just a bit like film grain, which everyone likes, right?

The library of games is pretty impressive for what's almost a new platform launch. There's enough there to keep most people interested, though as with a lot of VR games they tend to be more tech demos and experiences. That said, as a huge light gun fan, Until Dawn: Rush of Blood is my game of the year. 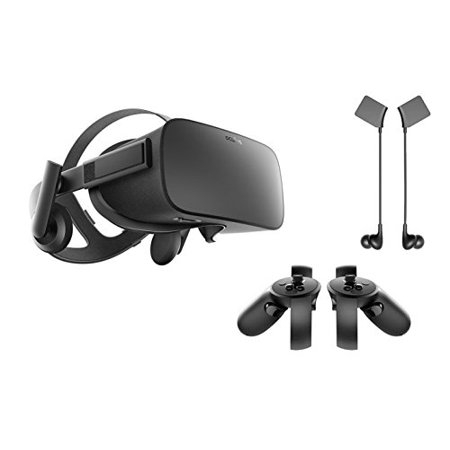 So this is the headset that started it all, if you forget about all previous VR en-devours. Initially it required a pretty beefy machine to hit the minimum spec, but thanks to fancy technology involving time warps and flux capacitors that minimum spec has been lowered and more people can get involved.

Undoubtedly a high quality headset, with built in headphones. It uses cameras to track what you do, when you eat and what colour your eyes are. And the headset/controllers. You can buy more cameras to help cover more of your room. Initially packed in with an Xbox One controller it also now supports additional motion controllers, which don't look awesome and which I'm not totally, 100% jealous of.

Bremen update:
Price: Discontinued (Ebay $200-300)
Resolution: 1080x1200 per eye
The first of the modern VR headsets, the Oculus Rift is a bit dated but still quite functional. It uses external cameras for tracking, which requires a bit of setup and a number of free USB ports, and the headset is small enough that some users have reported trouble wearing it with glasses. However, most people find it more comfortable than its main competitor the HTC Vive, and its Touch controllers are well regarded. 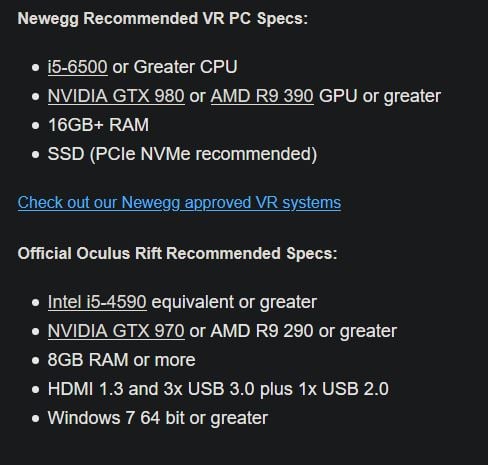 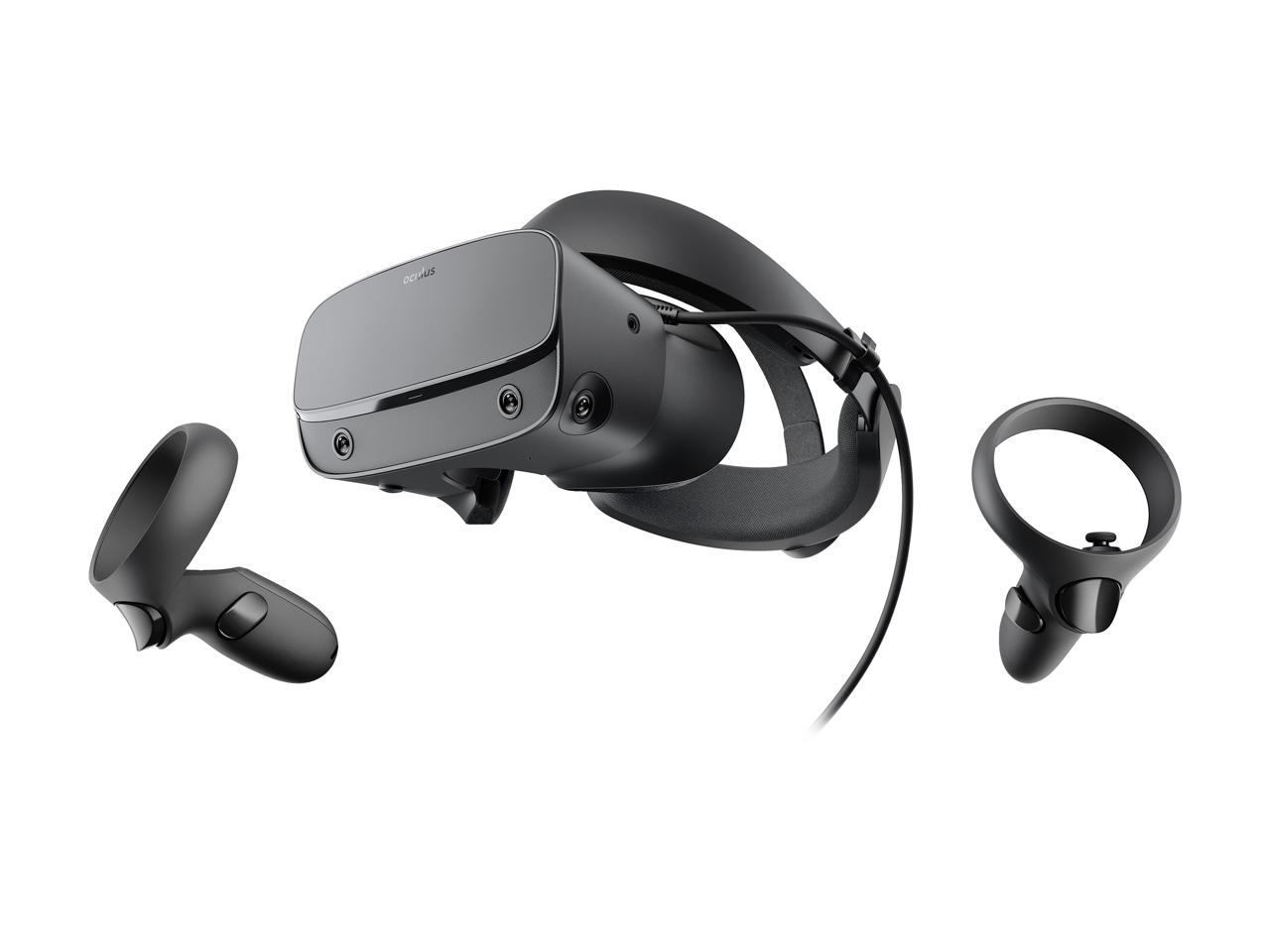 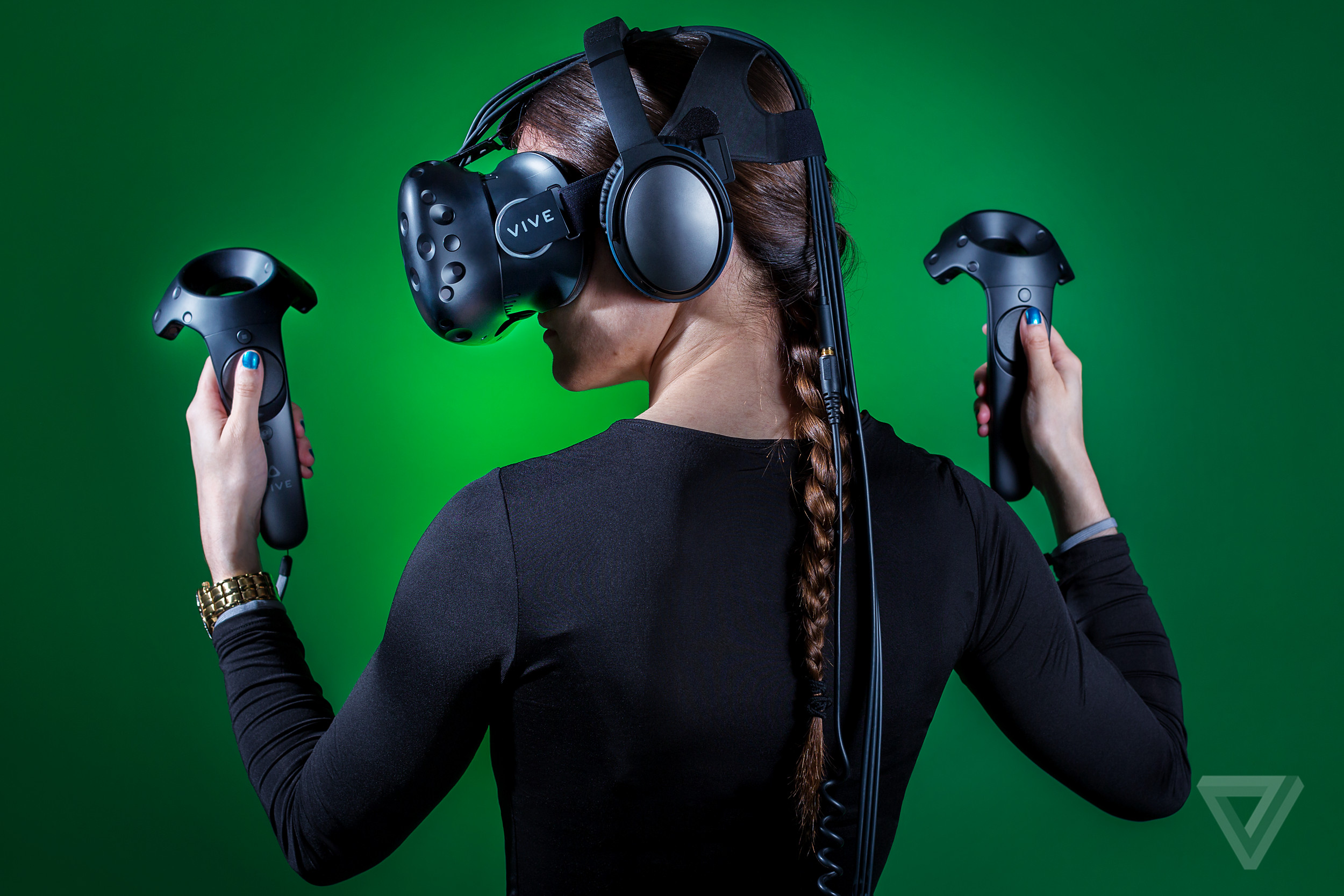 Just as everyone was getting super excited for the Rift, Valve piped up saying they were partnering up with HTC and releasing a headset themselves. It's designed more around the concept of 'room scale' and by all accounts you need a spare wing of your mansion to use it. Or a small square in your living room, depends who you listen to. Anyway, it came with some cool motion controllers. It tracks using lighthouses, which means people can't see you in your pants, but conversely if you don't live near the sea you probably don't have one close by, so you're out of luck.

Bremen update:
Price: Discontinued (Official Refurbished $400, Ebay $250-400)
Resolution: 1080x1200 per eye
Contemporary competitor of the Oculus Rift, the Vive is similarly dated. It also uses external tracking, but the base stations do not require a USB hookup (they do require power). Compared to the Rift, it offers more space for glasses and a larger tracking area (only important in very large rooms), but is generally regarded as less comfortable to use and with inferior controllers; Vive vs Rift arguments once raged all across the internet with no clear winner. A wireless upgrade kit is also available ($300), making the Vive line the only completely wireless PCVR options on the market. The Vive line is also parts-compatible with the Valve Index, meaning if you own a Vive you can upgrade piecemeal to an Index as desired or if individual parts fail. 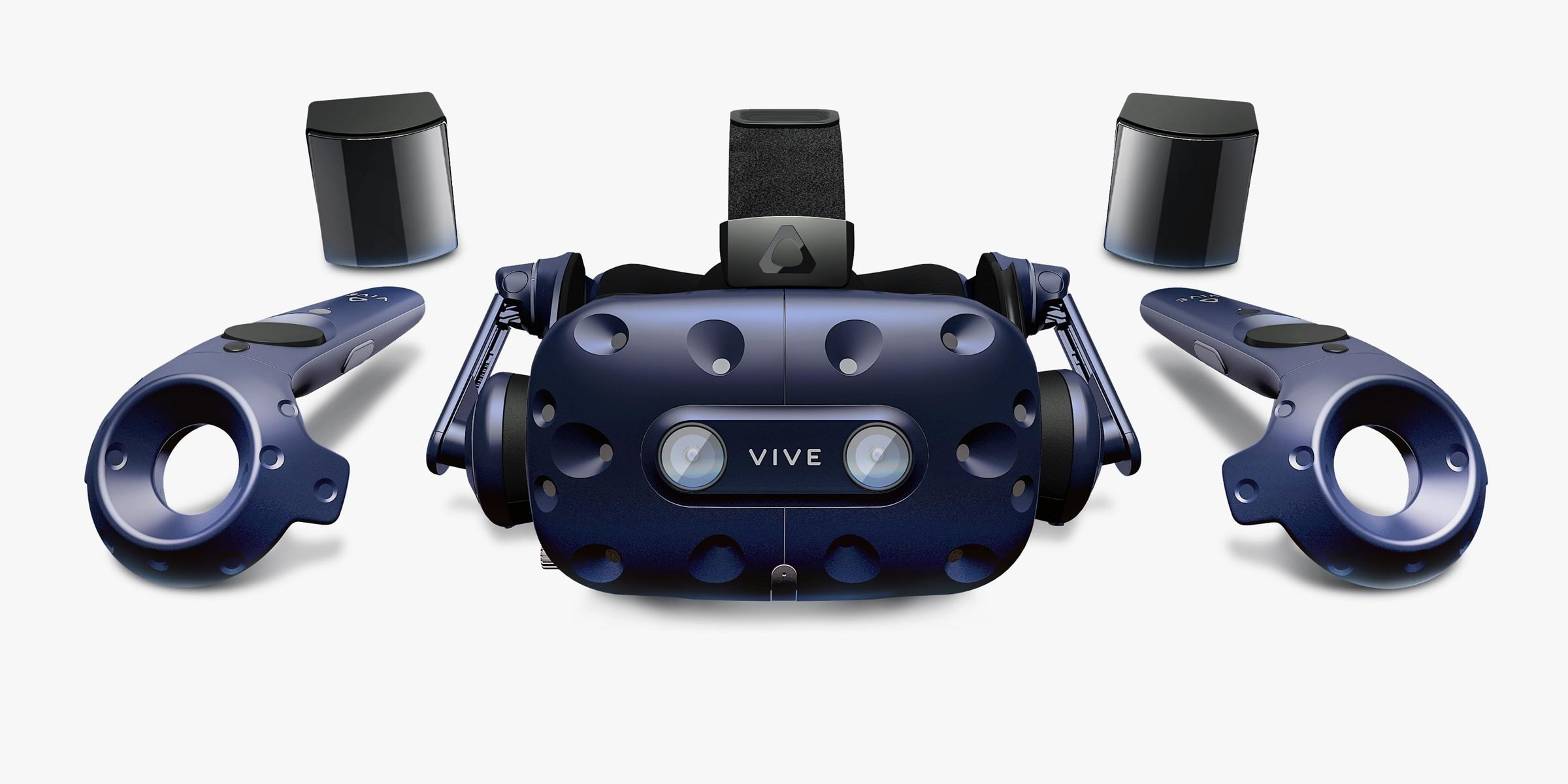 Bremen synopsis:
Price: $1098
Resolution: 1440x1600 per eye
An enhanced version of the Vive, it has now been almost completely obsoleted by the Valve Index. The only situation where you should consider a Vive Pro is if you really, really want a wireless option and cost is no object. 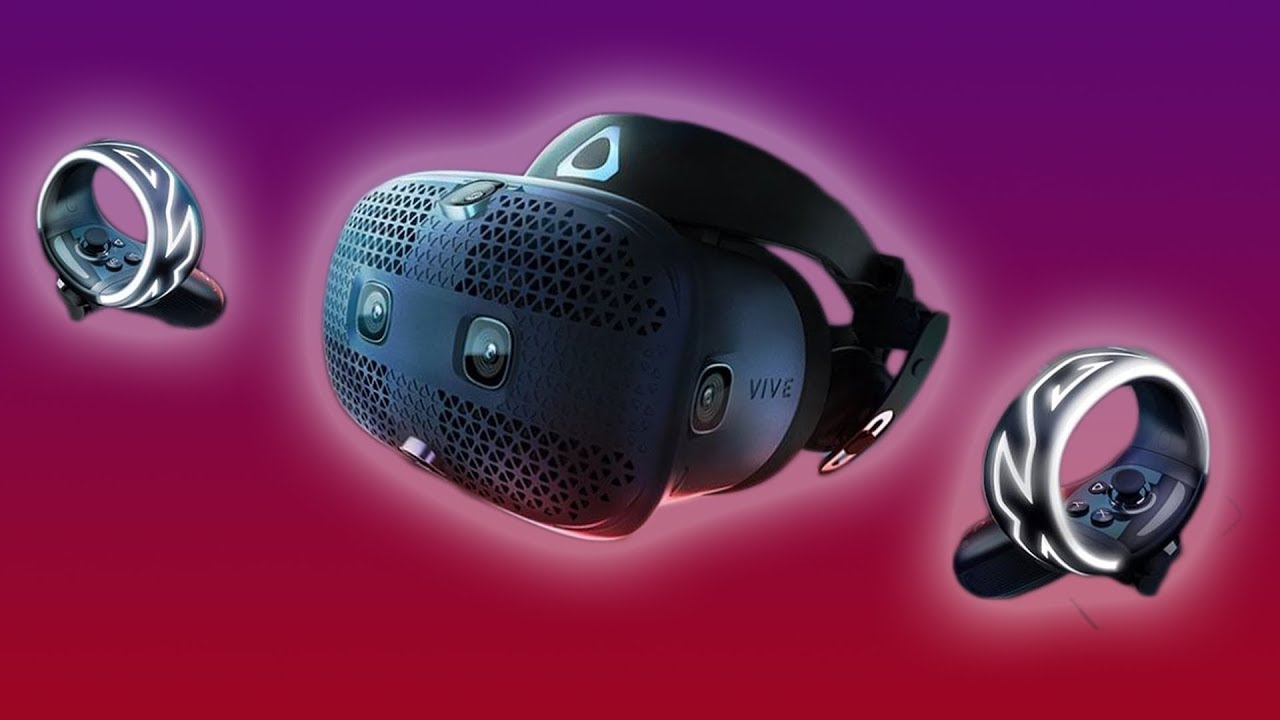 Bremen synopsis:
Price: $699
Resolution: 1440x1700 per eye
HTC's entry into the internal tracking market, the Cosmos doesn't benefit from Oculus' tracking software black magic, and is therefor a step down in quality from external tracking. It's quite a bit cheaper than a Vive Pro for a similar system, though, and thus might be an option for those seeking a wireless headset (note that the short range of the Vive Wireless kit means you still have to remain close to a PC). 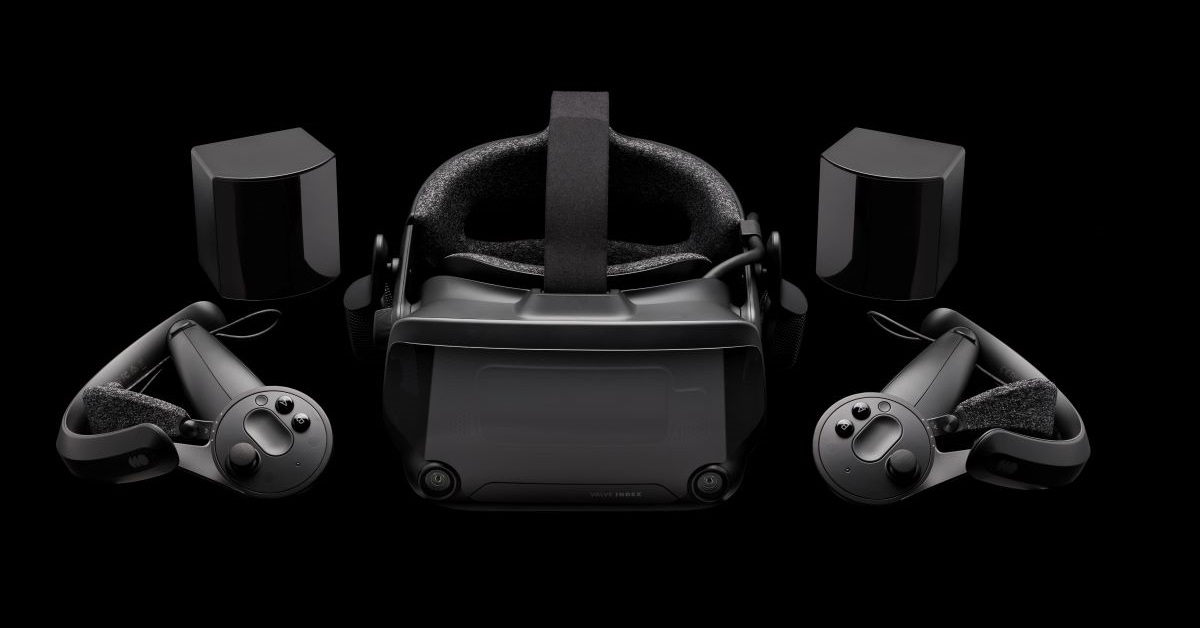 Bremen Synopsis:
Price: $999
Resolution: 1440x1600 per eye
Valve's entry in the VR market, the Index is a similar system to the Vive Line, which Valve cooperated with HTC on. It uses external tracking stations that requires power but not USB hookups, which results in somewhat intensive setup. In return for the high price and setup, you get what is almost universally viewed as the best VR experience currently available. If you're getting into VR for Half Life: Alyx, it's also almost certainly the system the game was developed and most extensively tested on, though Valve reports Alyx will be playable on all major PCVR headsets. 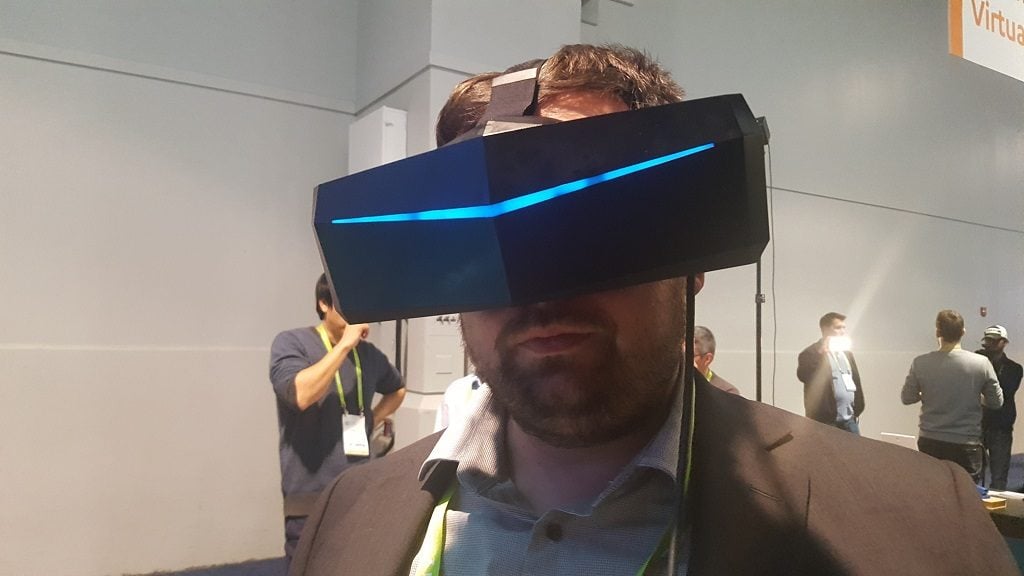 Looking for VR Games Suggestions? Check out this Google Spreadsheet (note, this is a non-editable link)
@Karoz to add more or for an edit link to do it yourself.
Fiatil's 360 3D Video Playlist
Looking to do some coop? Tentatively coop on Saturdays at 11 pm UTC (3pm /4pm in Summer US Pacific, 6 pm/7pm in Summer US Eastern).
Meet up in the PAVR discord (in spoiler below)
PAVR discord server

Anyway, discuss VR here. But let's not argue about which headset is best, because we all know it's the PSVR. Ok
Steam gg.deals
Karoz on October 2020