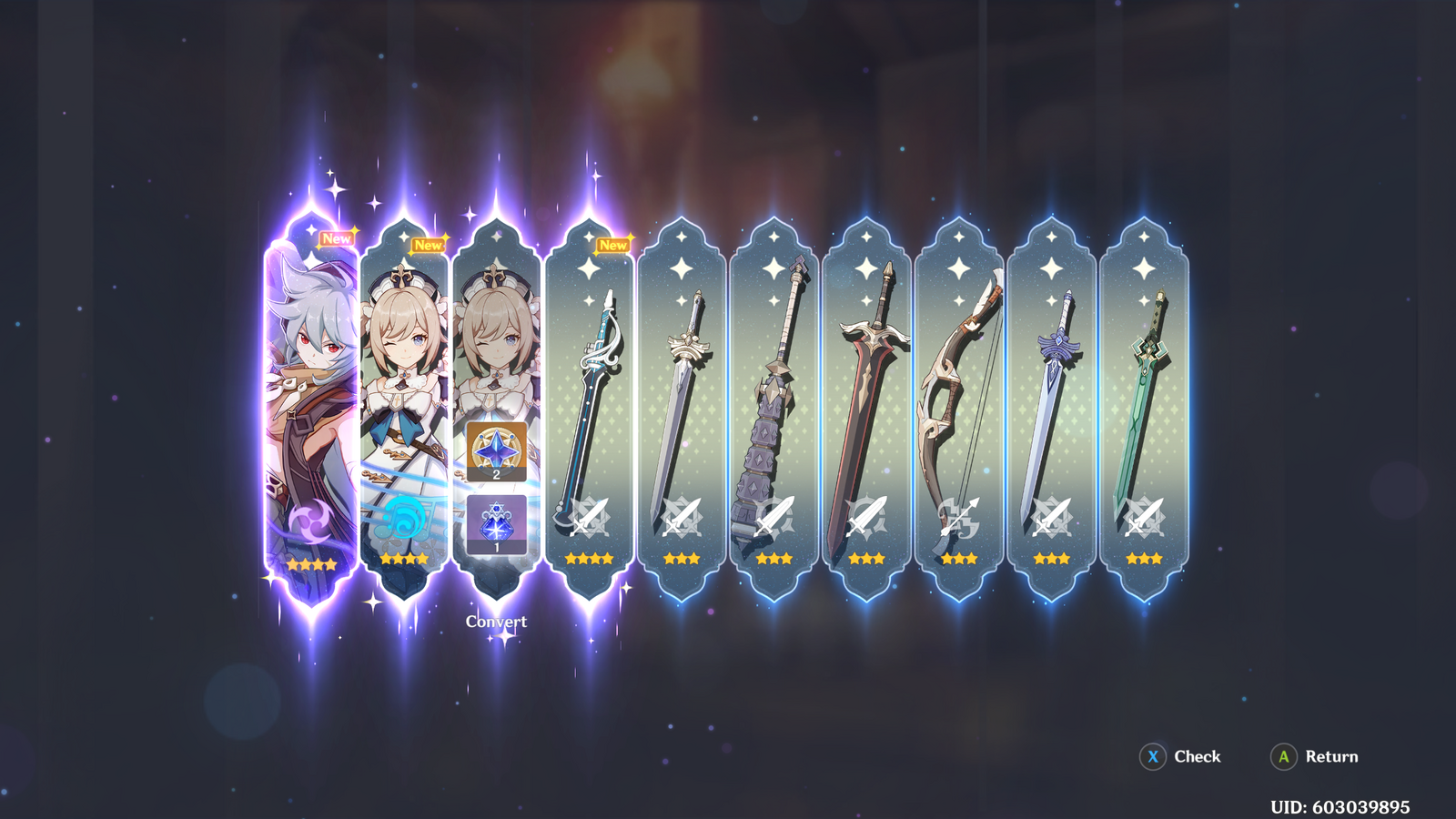 Anyway, Genshin Impact! It's a free-to-play action game/RPG for PC, iOS, Android, and PS4! PC, iOS, and Android devices also have cross-save compatibility, allowing you to take your anime girls, anime boys, and swords anywhere you want to play (as long as it's not a PS4)

Isn't this that game that's the Chinese Breath of the Wild knockoff?
Nope! while the art style is somewhat similar and the traversal is basically the same, with the glider and climbing anywhere, everything else is it's own thing. It's a party based action game, with fast-paced combat based on combining your characters' various elemental skills, no weapon degradation, co-op open-world play, crafting, and a gacha system for obtaining new characters and weapons.
Oh, it's a gacha game?

Well, yeah :/
You do receive a full party of 3-star characters in the first several hours of gameplay, plus a guaranteed very useful 4-star character, Noelle, on your first Wish (aka pull, summon, gacha, what-have-you) on the special Beginner wish pool, which you are given the currency for about an hour into the game. However, after that, you're kinda on your own after for getting more pulls. A 10-pull, the recommended way to wish, gets you a guaranteed 4 or 5 star character or weapon every time, so you should save up enough Primogems that you earn through gameplay or giveaways or spending money for those. The odds of pulling 4 and 5 star things are bad, but pretty much every character is useful so it's not like you can pull a "bad" character.
OK so it's a gacha, but is it fun
Hell yeah
The combat is fast, all your characters have a basic attack, a charge attack, a big dash along with a very fast sprint, a cooldown ability (called an Elemental Ability) and an ultimate that must be charged by defeating enemies (an Elemental Burst). Every character is aligned with one of the elements: Anemo (wind), Pyro, Electro, Dendro (nature/plant), Cryo, Hydro, or Geo, and their abilities (and sometimes attacks) will cause elemental effects on enemies, the environment, and/or themselves. These effects can be things such as Hydro's Wet, making you covered in water, Pyro's Burning, doing fire damage over time, etc. These effects can be combo'd together through Elemental Reactions, for example hitting a Wet enemy with a Pyro ability causes Vaporize, which greatly increases the damage of the triggering attack, or zapping a Frozen enemy with Electro causes Superconduct which blasts other nearby enemies with Cryo damage and reducing their defenses. Reactions are the key part of combat, making you quickly swap between your party, dodging dangerous environmental effects, and letting you melt the toughest enemies real fast if you know their weaknesses.
Exploration is also fun, as the game takes place in a giant open world, similar to BotW, with the ability to climb basically any semi-vertical surface and glide off cliffs with a wind glider. There's treasure to find, along with passive stamina upgrades scattered around, world bosses, side quests starring the various playable characters, resources to gather to increase your party's stats and improve their weapons and gear, and more. Plus, you can unlock a co-op mode, where you can explore the open world with up to 4 players, and doing daily quests and special events together.

If you're interested in giving it a shot, here's where you can download it:
PC: https://genshin.mihoyo.com/en
PS4: https://store.playstation.com/en-us/home/games#!/cid=UP6262-CUSA23681_00-OSRELSIEAGENSHIN
Android: https://play.google.com/store/apps/details?id=com.miHoYo.GenshinImpact
iOS: https://apps.apple.com/app/id1517783697