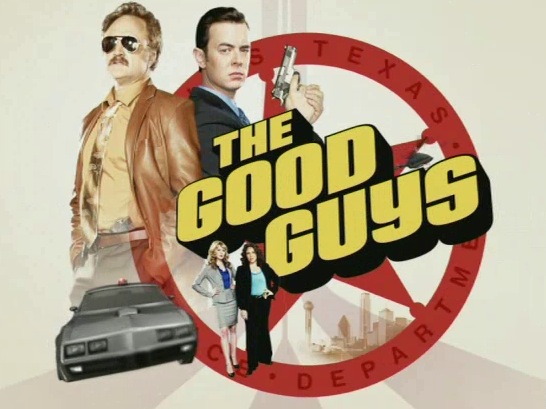 The Good Guys is one of the best new shows on tv.

The Good Guys Website wrote:
Once upon the 1970s, DAN STARK (Bradley Whitford) and his partner, Frank Savage, were big-shot Dallas detectives. So big, in fact, that they were lauded as American heroes after saving the Governor's son. Thirty years later, Dan Stark is a washed-up detective who spends most of his time drunk or re-hashing his glory days. A stranger to modern police work who would much rather trust his old-school police instincts, Dan has the reputation as being a bit of a wild card. Able to skate by on the heroic deeds of his yesteryear, he is still a semi-active presence on the force, and with the help of his liquor of choice, occasionally comes through to solve a petty crime.

Dan's new partner, JACK BAILEY (Colin Hanks), is an ambitious, by-the-book and overall good detective, but is sometimes a bit too snarky for his own good. His habit of undermining himself has earned him a dead-end position in the department, and he is stuck solving annoying petty theft cases that nobody else wants. Worse, he's been given the thankless task of babysitting Dan, the drunk pariah who can never keep partners for long. Jack may not see it, but he has little chance of getting out of his situation; his knack for making enemies at the station has assured he is not going anywhere.

His only ally is ASSISTANT DISTRICT ATTORNEY LIZ TRAYNOR (Jenny Wade), a quick witted former girlfriend whom Jack hasn't quite gotten over and the one person he turns to for help with his current professional predicament. Until Jack finds his way out of this situation, he is stuck awaiting the day when he can turn everything around, get back to solving actual cases and return to being a real detective.


In addition to this being an awesome show, Jenny Wade is smokin' hot.

Do you watch this show already? Let's discuss it!
Haven't seen this show yet? What the fuck is wrong with you? WATCH IT, DAMMIT!