Icessassins ALS Charity Weekend
We are running a special event in the store to benefit The ALS Association. For every kit sold from August 21st until PAX Prime 2014 ends we will donate the entire proceeds to The ALS Association for ALS research. You'll be able to view the current donation progress on the website which will be updated regularly.

So here's the nitty gritty. Everything I receive for payment for the kits this weekend will be going to The ALS Association, not just the "profit". This is literally the best deal I can think to give anyone who may be interested in playing the game and wants their money going to a good cause.


Assassins: Grand Hunt at PAX Prime 2014
You walk into a massive space filled with people; bright lights and loud sounds grab your attention. Your eyes narrow as you scan the crowd, searching for your prey. Your mission will not be complete until your target lies at your feet but your goals span far beyond your next kill.

Assassins: Grand Hunt makes use of Assassin's Creed images and content with the express permission of Ubisoft.

Wait, what?
Just like past community assassins games (Assassins and Assassins Ball) I will be organizing, producing and running this game. Ubisoft has graciously allowed me to use their imagery and game content and in addition will be promoting the game and providing prizes to give to the top-rated players. There may also be other ways to win Assassin's Creed related prizes and swag.

Instead of a kickstarter kits will be sold directly through a square marketplace store. For the time being I won't be linking the store from the forums but you'll be able to find it through the website (http://www.phenixone.com).

What is Assassins: Grand Hunt?
You are an assassin with a mission to find specific players and assassinate them, gaining prestige for yourself and your allied faction. After you confirm a kill on your target you will receive a new mission and the process starts over.

Unknown Assassin wrote:
The Assassin have many tools at their disposal.

Your Kit and Tools
Assassins are only as good as their tools and in the Grand Hunt it's no different. Each assassin kit comes with a large 3" player button that has a number of elements on it to identify players as an assassin. 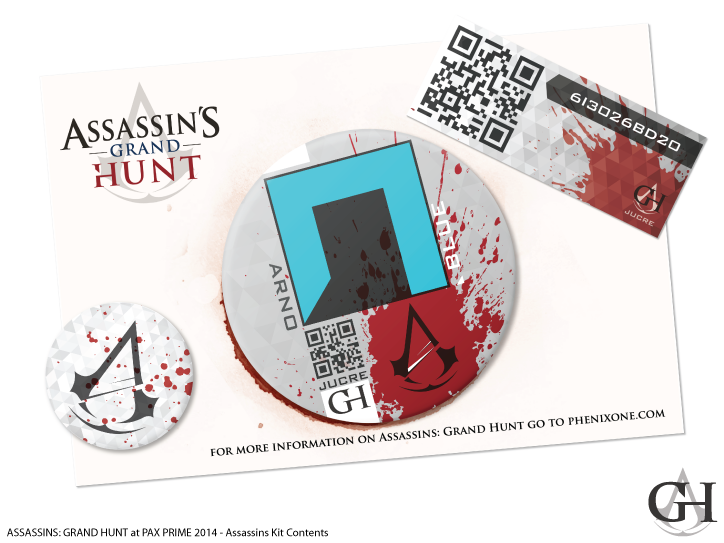 The button has both a standard pin-back and a clothing magnet attachment to ensure that it stays on. The button should be worn on your left arm facing out or on the upper left side of your chest.

Kill Confirm
In addition to the player button each assassin kit comes with a Kill Confirm card that will be used so other players can confirm they have attacked the correct target. This card has a prominent QR Code printed on it as well as an alphanumeric backup code. 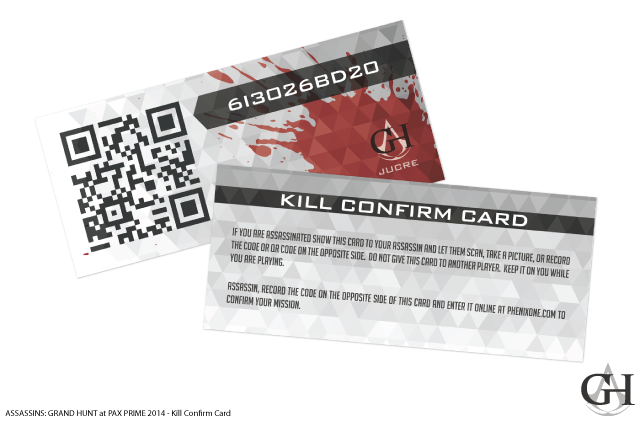 Website
The game website http://www.phenixone.com will be your primary tool for Assassins: Grand Hunt information, registering your kit and receiving missions. Here you will also be able to view your prestige and ranking compared to other players overall and in your allied faction. The site has been rebuilt to work on mobile devices for use during the game.

How to play
Once you've received your kit you will need to go to the game website and register your player button (You will need to create an account that requires a valid email address prior to this step).

Missions
Shortly before the game starts you will receive an email that your first mission is available. This mission will be displayed on the website on a Current Mission page. Each mission will identify a a primary and secondary set of of symbol to look for on other assassin players as well as the preferred faction for the target. The specified faction on a mission is always optional but matching it to you target will earn you more prestige.

While you will never receive a mission requiring you to target your own faction you are free to do so if a players symbol matches the one on your mission. Once a mission has been assigned, you will notice that a timer starts to countdown on the website. After a few hours time the timer will reach zero and if you have not found your target you may request a new mission.

Assassinating Players
Despite the subject matter Assassins: Grand Hunt is not a physical game. Be respectful when approaching a target to inform them you have just killed them. While you are encouraged to be creative please do not:

Confirming assassinations
To confirm your kill enter the code on that players Kill Confirm card on the website. Feel free to snap a picture of it for entering later in the event that you cannot access the website (You will need to confirm the kill before you will be given a new mission, however). You will only be able to assassinate players once.

Earning prestige
Prestige are points awarded for each confirmed assassination to the player. Points are also award to the assassins allied faction (except if the player and target are in the same faction). The amount of prestige awarded is determined by how closely you match your target to your mission.

Being assassinated
Struck down in your prime? Lucky for you, you were trained pretty well and your faction simply can't have you dying on the job. Unlike previous assassin games being assassinated is not the end of the line. When another player approaches you to be assassinated be cordial and allow them to see you Kill Confirm card but do not let them take it. Once they have scanned or taken a pic of it they will return it and be on their merry way. You may then continue with your mission, just be more careful ok?

Choose your allies. Find your purpose. Join the Grand Hunt.

Factions
Factions are powerful organizations whose goals affect the future of our world. As a player in the Grand Hunt you will ally with powerful and famous assassins or groups throughout history; you will have to choose a side from among the options below:

What's next?
Don't see something covered here or uncertain about something? Got a suggestion or constructive criticism? Think this is awesome? Let me know below! I'm very excited about this years game and I hope you are too! If you're posting a question for me, please place @MarsChelios in your post so I can be alerted and respond promptly.