I'm Bobbin Threadbare, are you my mother?Registered User regular
April 2015 in Games and Technology PENNY ARCADE FORUM, RECRUIT A TEAM OF STUNT ACTORS WHO ARE KIND OF TIRED OF THEIR JOBS , the creators of Knights of the Pen & Paper In Chroma Squad, you manage a group of stunt actors who get together and decide they've had enough of listening to no-talent directors, and decide to form their own TV Studio to film their own Super Sentai show.
If you've played Behold's previous game, you will probably be pretty familiar with the central conceit of Chroma Squad, wherein the mundane foundation of the game and the fantastical premise of the fictional overlay blend together. Sure, you may be just managing a bunch of actors, but once you get into combat situations they may as well be fighting actual aliens, albeit occasionally shoddily costumed aliens. 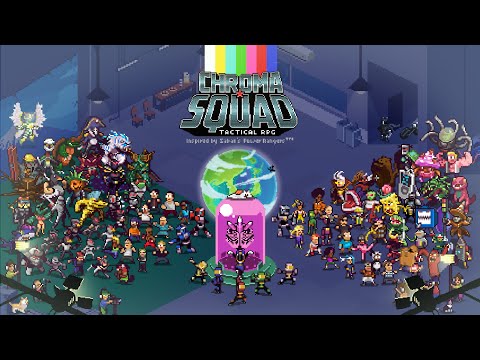 Throughout each season of your Super Sentai TV show, you'll work to buy and upgrade equipment for your TV studio, craft weapons and armor out of duct tape and play-doh, and create a "giant" robot out of cardboard. And as you progress through each season, your sentai team will become stronger, unlocking new skills based on their role in the team. Better production values means more fans, more fans means more money, and more money means you can finally ditch that helmet you made out of an old bucket and get some real props. Chroma Squad just released today and can be purchased at Chromasquad.com, which gets you a Steam key along with a DRM free download if that's your kind of thing.