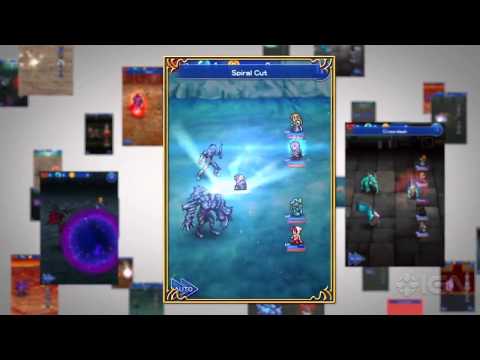 Naive, past Silence1186 wrote:
[Final Fantasy Record Keeper] Is actually a pretty fun mobile free-to-play game for iOS and Android. It's not perfect by any means, but it's a HUGE improvement over such duds as All The Bravest. It's a walk down memory lane with a simple ATB style combat system with a surprising amount of depth and strategy. There is a new event every week, featuring your favorite characters and stages from Final Fantasy history, so it never gets old, and it IS free to try, so give it a shot if you have some time to spare. Just don't give them any of your money.

How naive I was about this little game.


This is the thread for talking about Square Enix's F2P Mobile game Final Fantasy Record Keeper (FFRK) for iOS and Android. Initially met with skepticism after some of SE's lackluster F2P entries in the past, it has grown in scope and popularity to the point where it gets as much discussion as any other mainline Final Fantasy game.

The game features a pretty basic Active Time Battle system. You can take up to 5 characters, made up of all your favorites from past games (and one original starter character) as you journey through the cliff notes version of all the Final Fantasy games. Each Final Fantasy game is a world, made up of dungeons with several stages. Each stage requires you to spend stamina to attempt them. Stamina recharges at a rate of 1 every 3 minutes. There are also limited time events that occur every week featuring additional stages, characters, and rewards.

There is a surprising depth of strategy to this game, as each character can equip different combinations of equipment and abilities, allowing for many different approaches to tackling some of the at times quite intense challenges. Characters and equipment also get bonuses if you match them to the world you're in (for example, Cloud gets a bonus in FF7 stages, as does anyone equipping his Buster Sword).

The F2P comes in the form of the in-game currency, Mythril, which allows you to pull powerful relics from reward banners. Mythril also allows you to recharge stamina, and to try again if you happen to be defeated in a stage. You can spend real money on Gems which have the same function as Mythril, though refreshingly for a F2P game it's possible to clear all content without spending a dime. This is thanks to several quality of life features implemented by DeNa, chief among them the Friend Summon system. Additionally, rather generous amounts of free Mythril are available between a combination of login bonuses, stage completions, event participation and quest completion.

Tips and information for new players starting out;
1) Quests.
From the home screen, the Missions button in the upper-right features Wayfarer, Normal and Special missions. The Wayfarer missions are meant for new players and will guide you to some of the game's basic features, as well as giving you some nice ability and item rewards. Move on to the Normal missions from there. Special missions are not in the game yet, but will involve high difficulty content when they arrive.

2) Stamina.
You can see the current / maximum stamina numerically in the upper right corner of your Home screen. Below that is an orange bar that shows the same thing, but below that bar is a set of 5 hexagons representing your current Stamina Shards. When you get 5 Stamina Shards, you refill your stamina to full and your maximum goes up by 1. The filled in hexagons show you how many stamina shards you have towards the next stamina refill and maximum +1. It is to your benefit to collect that fifth shard when you're running out or empty of Stamina. Efficiency is good!

3)Record Info.
When reading about the record in question, several tabs will be available with story, reward and boss info. Here you can read about the story background, rewards, and boss strategies as well as any medal requirements.

Upon completing any given stage in a record, your performance will be ranked. For any stage without a boss, you can earn up to 9 medals. You will lose medals if more than one party member dies, or if the party takes too much damage or uses too many actions to clear the stage. Earn enough medals and you will gain the Expert or Champion rating for the stage, which provides 150% and 200% experience, respectively.

Upon finishing the entire record, there are 3 reward levels; Completion, First Time Completion and Mastery. You can get the Completion bonus every time you complete that record. However, the other two can only be achieved once and typically include excellent rewards. To attain Mastery rewards, you must have earned 83.33% (5/6th) of all medals within the record. Remember those boss medal requirements? Each gives 3 medals if completed or 0 medals if not, so for records with few or only one stage, boss medal requirements can be crucial for obtaining Mastery rewards.

5) Events.
Typically, there's 1 or 2 events running at any given time. These events start at a very low difficulty that even first day players can participate in, and end at very high difficulties that even longtime veterans can have trouble with. Rewards for completing event stages can include new or returning characters and their Memory Crystals (used to break level caps), weapons, armor or accessories from the event's realm, orbs, upgrade materials and of course Mythril. Events typically run for about two weeks and overlap, and you should definitely try to complete as much of each event as possible.

7) Record Dive.
The Record Dive system allows you to power up certain characters who have reached level 65, adding small amounts of stat points, percentage boosts to certain types of abilities, adding or increasing ability ranks or adding additional equipment options. The available powerups are different for each eligible character. You unlock these power ups by expending Motes, which are a special type of currency obtained from a variety of sources including Event rewards.

8) Daily Dungeons.
Each day has a specific set of 1 or 2 dungeons. You can only get the First Time Completion and Mastery rewards once, same as the records, and those rewards don't refresh from week to week. So if you complete a stage of the Sunday dungeon, next Sunday it will still show them as all completed (though you could still farm the dungeon for normal drops or experience.)

Monday through Saturday, the daily dungeons have rewards for and can be used to farm orbs, upgrade materials or Gil. The Sunday dungeons feature battles with a tremendous amount of experience. To put it into some context, A + difficulty stage of a Monday-Saturday dungeon gives around 10,000 exp to be split to the party, while the experience dungeon gives up to 100,000!

The daily dungeons now reward Gysahl Greens upon completion, and enemies have a small chance to drop additional Greens. These Greens can be exchanged for orbs, eggs, gil or upgrade materials at any time, and once per week the Special Shop will restock a variety of Major Orbs (at half price, relative to buying 10x Greaters), MC lodes and Mythril. Additional purchases may become available from time to time (accessories, items, etc.)

9) Nightmare Dungeons
A new feature to the game, the Nightmare area will be open for two weeks every month, and each month adds a new dungeon. All previously added dungeons are accessible at any time that Nightmare is, so don't worry, you can catch up eventually. The Nightmare dungeons feature a series of challenging boss fights, culminating in a special fight where all characters of a certain 5* ability will get full synergy for themselves and all equipped items, regardless of what realm they or the items are from! These final fights are like puzzles that must be solved and typically require planning and tactics instead of super powerful gear.

Completing the final boss of a Nightmare dungeon gives you a Record for a powerful 6* ability, which require 6* crystals to make. These crystals are currently very slow to acquire, but eventually they will be farmable from high difficulty bosses.

10) Relics.
The Relics page, accessible via shortcut on the bottom right of most screens, is where one can "pull" from a variety of "banners" for items. Banner pulls are always at least 3* rarity, with a lesser chance at 4* rarity and a ~13% chance at 5* rarity. Doing so costs Mythril (in game currency) or Gems (purchased with real $$$).

Banners are typically linked to current Events, and every banner has featured 5* relics. If you're lucky enough to pull a 5* item, most of the time it will be one of the featured relics, but there's still a chance it won't be.

One can do a single pull for 5 Mythril, a triple pull for 15 Mythril or an 11 pull for 50 Mythril. Single pulls allow you to stop if you're lucky and hit something you wanted, but 11 pulls give you the most bang for your metaphorical buck. Your odds of drawing a 5* item are the same no matter how many items you pull at once and no matter which currency you use to pay for them.

Bluecyan wrote: »
FFRK Acronyms 101
MC - Memory Crystal [Item to break a characters level 50 limit. MC2 is used to break their level 65 limit.]
RM - Record Materia [New equipment type once MC is used. RM slot unlocked by breaking characters levels. RMs are acquired from level broken characters in a variety of ways]
SB - Soul Break [Think Limit Break from FF7, new ones can be learned by character specific 5* relics]
SG/SSII - Sentinel Grimoire/Stone Skin 2 [Also refereed to as Walls, either is a massive defensive SB]
SSB - Super Soul Break [Like an SB except they will also bestow a permanent stat up to the specific character when learned]
BSSB -Burst Super Soul Break [Like an SSB except it changes Attack and Defense commands to something else for a limited time]
M_O/G_O - Major Orbs/Greater Orbs [the middle _ represents which type of orb between Fire, Ice, Lightning, Earth, Non-Elemental, Dark, Holy, White, Black, Power, Summon]
_*++ - Blank is a number 1-5 which represents an items base rank (not combined). Every plus after the * represents how much its been combined. [A 3*++ will show up as a 5* in game but will be only about as powerful as a 4*. Rule of thumb is every item combination adds about half a rarity level of power.]
RS - Realm Synergy [Character or Item matches dungeons realm ie Cloud in FF7 dungeon or Blitzballs in FFX dungeon. This adds about 10 levels of stats to a character or about a rarity level in power to an item]


How can I learn more?

A while ago, FFRK added a friend summon system. We have a spreadsheet here you can plug your friend code into, and find the friend code of other PAers. In this spoiler is the old list of codes for reference purposes.