[DC] New Earth One announced- Hal Jordan as a smart person?? What a twist!

Registered User regular
July 2017 edited July 2017 in Graphic Violence
Green Lantern: Earth One by Corinna Bechko and Gabriel Hardman (the team behind Invisible Republic) are doing what seems to be a more sci-fi as opposed to superhero take on Green Lantern in the newest Earth One book.

For Green Lantern, the story sees Hal Jordan re-envisioned as an astronaut who seeks the thrill of discovery, yet finds himself in an unfulfilling job prospecting asteroids for Ferris Galactic. His fortunes change when he finds a powerful green ring and learns that it came from the Green Lantern Corps, a group that was long ago murdered by killing machines called Manhunters. This sets him on a mission to reinstate the Corps, a nearly impossible task for the fearless Jordan.

Ferris Galactic is a great name

Hal Jordan is a smart, capable person with a space and science background who has a lot of untapped potential even before he finds the ring,” Bechko explained. “That means he’s going to approach everything the ring does from the perspective of a scientist, but he’s going to employ it for action and adventure. The result for us as writers is the opportunity to fully embrace the science fiction aspects of the story in a way that would be impossible with a lot of other characters.

Pretty radical take on the Hal Jordan I know 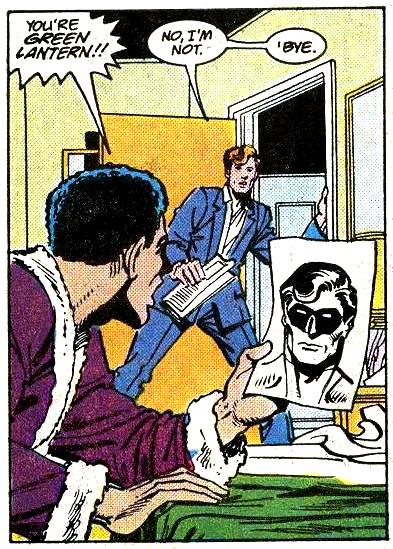 Most of the Earth One books have been luke-warm for me. Batman E1 was pretty good and Wonder Woman E1 was absolutely gorgeous, but each of the Superman E1 books have been duds and Teen Titans was just alright. This one looks cool though so i'll definitely be suckered into picking it up.
Tairu on July 2017