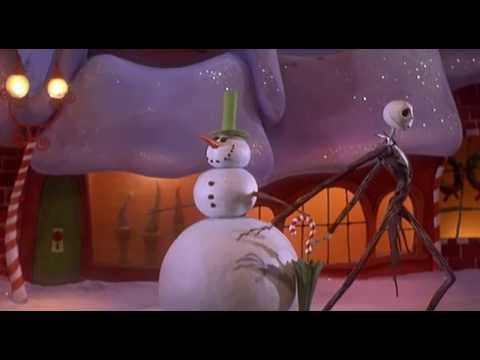 "Oh, Mayor! I have a wonderful idea!" Said Jack Skellington as he came running into the Halloween Town square.
The Mayor's happy face spun around until it landed on his worried face. "Jack, please tell me you aren't going to make Christmas again!"
"No, no, no." Jack said with a wicked smile on his Bone face.
"Well, good. What is this idea?"
"We are going to have a Christmas Party here in Halloween Town!"
The Mayor's face spun again to his happy face. "Keeping it in town might actually work and be safer!" The Mayor clapped his hands and grabbed his megaphone. "Attention! Attention! We are having a Christmas Party! Bring gifts to share with everyone! And let's not cause a lot of trouble! We don't want a repeat of the last holiday party!" The Mayor points to the bones of a large bunny hanging over the well in the middle of the town square.

Among the crowd of monsters and creepy crawlies was three small faces covered with three big masks. "Oh! He should know this!" Said one face. "Yeah, it might be fun to mess with the party!" Said another. "Well, let's tell Him my idea!" Said the third. "Your idea? It was mine!" Said the first and the three small figures slipped away, arguing who was going to tell Him the plan first.

Welcome to The Nightmare Before Christmas Phalla! Normal Phalla rules apply. On top of the red vote to get rid of those looking to ruin the party, you'll also get to play a game of "Dirty Santa"! Each night you'll earn scares (the currency of Halloween Town) that you can use to buy gifts. But you can't use the gift you bought. Instead, you need to give those gifts to another party-goer! You can buy the gift and give that gift to someone the same night.

Gifts
1 Scare: Screaming Head- You get an extra vote, but this one is private. PM Grunt's Ghosts your vote. This vote doesn't have to be the same as your public vote.
2 Scares: Snake Eyes- Allows you to seer someone's face. PM Grunt's Ghosts to seer a person.
2 Scares: Flesh Masks- Allows you to appear to be someone else, but who? Last only one night before it rots away. Ewww... May give you powers... Or just make you a target!
2 Scares: Hat from an old Bat- It's stylish, it has a strange aroma, and it's magical! Protects you from harm once for a night (but not the vote!) Afterwards, it wakes up and flies away...
3 Scares: Jack in the Boom- It's a bomb! When you are gifted this gift, you may gift it to someone else. But the bomb might exploded, killing the person holding it...
3 Scares: Rusted Diamond Rings- It's a nice day for a Black Wedding. Give this gift to two people. Those two are now locked together until Death Do Them Apart! They will know that they are now wed but not who wed them. When one dies, they both die!

How gifts work:
You can't use a gift you bought, only gifts given to you. You can give as many gifts as you have to as few or many people as you want but you can only use one gift each night. You can't trade Scares!