Elder Scrolls Online is the first venture of Bethesda' and Zenimax' foray into the MMORPG genre. Elder Scrolls is a popular first/third person sandbox RPG which has recently had their Fifth version named Skyrim.

Elder Scrolls Online will feature three different factions that that you can choose to join: The Daggerfall Covenant, Ebonheart Pact, Alderie Dominion. There will be one generic race that can be any faction you want, but it's being included in the collector's edition only.
There are three different races per faction and each bring their own perks that pair well with one of certain class, all based on the original works of Bethesda Soft. 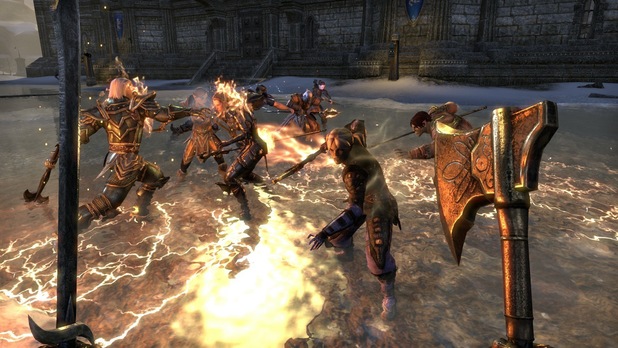 Each level allows players to increase one of three different attributes, health, stamina, and mana. Skills in Scrolls Online, are varied and can be concentrated on one aspect of your character, or you can spend them evenly depending on what type of character you want to create. Skills can be learned through different ways, such as skill stones, randomly placed stones that reward adventuring. Some quests reward skill points just for completing them. Different skills can do different things, and multiple classes can learn some skills that other classes learn

Each skill that is native to your class can level up through branches, these branches are call 'Morphs". Each level defines what your character can do, and how you can use your individual skills.

Skills are gained as you level up, or find crystals throughout the land of your native faction.

http://www.youtube.com/watch?feature=player_embedded&v=-18qjhldUZM
[PVP] is going to be centered around 8 man small groups and giant keep sieges with siege equipment. End game sieges will be fought between all three factions and will fight for control of the Imperial city . If your alliance captures
Imperial City the top alliance(faction) player becomes Emperor and that player gains access to a special skills that are very powerful.

PVP in this game are mainly made for massive battles and are usually joined when you hit level 10 and up. Siege weapons, keeps, supply routes, and small man battles are also part of PVP. Players can be teleported to castles under siege for free from one of the non active keeps. Keep battles and PVP in general are a struggle between all three factions.

Like the original games, ESO will have a large amount of customization through skills, an epic story, and gear. Also true to the Series: landmarks, villages, housing will remind hardcore fans of one of their favorite Elder Scrolls single player RPG.
You can become a werewolf, a Vampire, and join factions such as the fighter's guild, or the mage's guild. Players also earn skills they can invest in when they complete quests.


Quests and way-points are easy to locate on the top of the UI where there is a compass like other Elder Scrolls game, showing the nearby places of interest. Traveling is done by finding shrines and for a fee, you can travel back and forth through these shrines like fast travel in previous Elder scrolls game. You will also be placed at the nearest shrine if you happen to die while questing. Afraid of dying near a place without the nearest shrine discovered? You are automatically sent to the nearest shrine whether you have found the shrine or not.

Soul traps also work as an easy way to resurrect. There is a skill that allows you to trap trap an enemy soul in a soul gem, allowing you to resurrect where you died and not have to travel from the nearest shrine way-point.

«1234567…92»
This discussion has been closed.
Penny Arcade Forums› Games and Technology› MMO Extravaganza
Powered by Vanilla