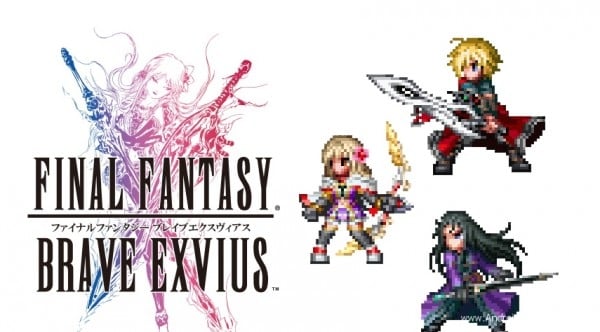 Note to new or returning players
You can now make 7 star units with dupe 5 stars, and it means that you can spend even more resources failing to get OP units! Whooo!


I've played Brave Frontier and liked/hated it. How does this compare?
Final Fantasy Brave Exvius is an expanded spin on Brave Frontier, with whom it shares some similarities. It's another gacha game, meaning you will earn in-game currency, coming in the form of Friend Points and Lapis, to summon new units on a seemingly unfair spreadsheet of hidden factors that emerge in the form of unique characters, and many familiar to the world of Final Fantasy. This game, though, adds the usual Final Fantasy elements of equipment and materia, giving a surprising depth to the gameplay as units can be mixed and matched with different abilities and stats boosted or modified.Each unit can equip up to 6 types of equipment and 4 materia, but each unit also has limitations and advantages to what they can equip and use.

The roster of characters in game is a mishmash of various Final Fantasy games and units exclusive to FFBE, although most people care about the FF characters. As previously mentioned, characters are added to the gacha, usually alongside special events that tie into the game they're from (unless it's just more FFBE exclusives). Unlike other games of this type, the rarity isn't just in the higher rank of the unit, but also the characters themselves.

Further, different units are good at different things. Some are chainers, some straight damage or support, healers, and so forth. Good units often do a useful mix of those abilities.

Here's a link to a site that will update regularly as the global version gets more characters, and ranks the units by various categories to back up the reasoning for their position in the tier list. Unit Rankings

I'm new, and got a bunch of these characters out of my first 11-pull. Are any of these good? I love Shadow/Sabin/Penelo!

Unfortunately, your Shadow/Sabin/Penelo are some of the worst characters in the game. Yes, they are beloved Final Fantasy characters, but that doesn't exclude them from being King of the Trash Heap. Someone has to be, right? A lot of early characters are mainline Final Fantasy units, but by nature of power creep, they’ve been long overshadowed by new units. Different units are powerful or weak in different ways, and just because a unit is popular in their original Final Fantasy series doesn’t mean they will be useful in FFBE.

However, FFBE is unique in that many older units are perfectly viable. Good team composition and strategy can make mid-tier units very good, and sometimes spending a bit of time thinking through a tough fight can result in eeking out a well-deserved win. Many players are F2P (they spend no money) and have a good roster of units, or are otherwise able to tackle some of the hardest content in the game.

If you're just starting out and want to know who to look for, note that as we are 18 months into the game, the hardest content tends to require some fancy gear and "rainbow" base units. If you see a rainbow crystal, rejoice, for it will grant a 5* base unit, which range from useful to very powerful and can easily secure a spot on your team! Now, get 2 of them!

The state of the game:
Pull for 5 star units, as they have the best future, and most, when they get to 7 stars, will carry your team.

To find your friend ID in the game, tap Home in the upper right corner (on most screens), then the Menu icon in the upper right, then Player Info on the left. Your ID should look like this in your little character card: 123,456,789. This is also where you change your greeting, and rename your character if you like. Adding friends is the only way to use your "guest character" limit break in combat, and only your current party's Leader is shared to friends. Remember to set a Companion Party from the Options in the Main Menu! This way, you will always have a party set up with a specific character that will be shared to your friends, and you should never ever edit that party except to change the Leader if you want to change who you share.