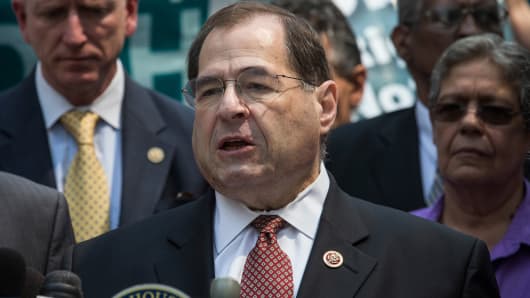 This guy. Jerry Nadler (D-NY), the chairman of the House Judiciary Committee. Today he issued letters requesting documents and interviews from 81 people and organizations into allegations against the White House's and/or Trump campaign's:

Abuse of Power
McGann again, and all of his deputees. Among others.

Hey mods, what's on topic for this thread?

This is evolving, but current rulings are:

1) If the House Judiciary Committee is doing it, it's on topic.
2) If a House Judiciary member talks about these things resulting in impeachment (it would start in this committee), that's on topic. If you're generally speculating about impeachment on your own, that's not.
3) There will be some overlap with Mueller thread, the Trump Organization thread, and various other threads. Mods say that's fine.

Not on topic:
1) Mueller things that House Judiciary does not yet seem interested in, those go in the Mueller thread.
2) Same deal with all the other threads.
3) Idle speculation about impeachment without a specific impetus from a member of House Judiciary.
Herbert Hoover got 40% of the vote in 1932. Friendly reminder.
Warren 2020
enlightenedbum on July 2019