Registered User regular
May 2013 in Games and Technology

Fight off hordes of monstrous mutants created from a strange cataclysmic event in the new tower defense game, Prime World: Defenders. Join a group of exile treasure hunters who have ventured into the capital of an ancient empire, vast with mystery and danger.

Prime World: Defenders merges classic tower defense gameplay with collectible card mechanic. Your towers, your spells, your traps - all are magic cards that you can collect and upgrade. You'll have to develop your own strategy because you'll get your random set of cards after each battle.

Freeze, burn, poison, explode and slash countless enemies that will try to stop you from gathering artifacts of old kingdom. Choose your cards carefully and play them strategically. Expect some heavy resistance along the way – from small and almost harmless mutated fungi to powerful giant goblins and nagas. 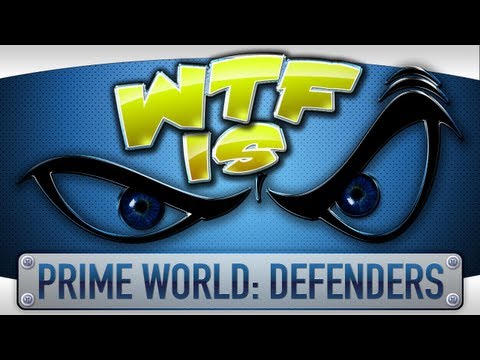 So how does it work?

These are the cards:

You have 3 basic types of cards in the game. Towers, Magic, and Artifacts
-Towers cards allow you to summon that particular tower in battle, each has varying strengths and weaknesses which you will need to know when deciding which ones to add to your deck for each battle.
-Magic Cards allow you to use various in game effects ranging from damage dealing to slowing effects, and more. They have a cooldown time which effects how often you can use them in battle.
-Artifacts are used for fusing. They provide increased experience boosts when fused with other cards, allowing them to get stronger, faster.


So Whats this about Fusing? I can Level up my cards?
-Tower and Magic cards can be Fused with other cards (and a small monetary fee), earning experience to level up the card, increasing the Tower or Magic card's stats.
-Tower cards can be Evolved by combining them with more copies of the same card (and a larger fee). This drastically increases their stats, and allows you to upgrade the tower in battle.

So you mentioned a Deck. How does this work?
You cant take all of your cards into battle at once sadly. You will have a limited number of slots to add cards that you can take into battle. These slots can be increased through Leveling up, and purchasing Talents. You will need to look at the enemies you will be facing and the map you will fight on, and decide which Towers and Magic will best help you.

So how do I get these cards anyway?
Aside from a few cards you are given early on, you will randomly receive cards as rewards from finishing random battles, as well as from buying booster packs or Chests in the Shop.

Wait a second... Shop? Don't tell me there are Micro-transactions.
Thankfully... No! Everything uses in-game currency you gain from battles, achievements, and gaining levels!