In 2577, the inaugural F-Zero PX championship was held. This preliminary league of the F-Zero racing championship was meant to not only feature up-and-coming pilots, put also serve as a source of additional money and attention to fuel the racing fever held by so many across the galaxy. Unfortunately, the nature of the PX league as an entryway into the even more lucrative top leagues also attracted the attention of those who would do harm with the fortunes gained, in particular the criminal organization Crimson Eclipse. Heavy speculation has formed around the winner of the first PX championship, Joker, as a Crimson Eclipse agent, but as of yet, the Galactic Police have not yet been able to pin any solid connection between the pilot and the underworld enterprise.

One year later, the rumors have not stopped the PX league from continuing onwards, as the general populace continues to maintain its high demand for racing action. The league commissioners are continuing to experiment with rules and regulations to make the racing more exciting (and to increase the league revenue). It's been taken as a given that Crimson Eclipse will be registering their own pilots to try and get an additional foothold into the F-Zero championship. But the Galactic Police are also taking the preliminary league seriously, and they're also rumored to be entering pilots of their own to take direct action. The stage is ready for another exciting season of racing. The 2578 season of F-Zero PX awaits a new champion!

This is a Phalla game, Penny Arcade Forum's version of the party game Mafia. If this is your first game, it will be informative to visit the linked topic for some background information.

This Phalla is structured as a traditional game, with an uninformed majority composed of most of the F-Zero PX racers pitted against an informed minority, members of the criminal organization Crimson Eclipse. This game also features race simulation mechanics, where players participate in races in the F-Zero Grand Prix in the hopes of becoming champion. At the end of six races, the player with the highest point total will be crowned the champion of the F-Zero preliminary league and win fortune, fame, and the right to participate in the highest F-Zero circuit. Unlike other games, the game does not end with the elimination of all minority members or the outnumbering of minority members to majority members, but instead carries through all six races. If the minority manages to set one of their member atop the podium at the end of the grand prix, then they will be declared the winner; otherwise the uninformed majority wins, with the circuit winner achieving an unofficial distinction on top.


Pilot and Machine Customization
All players will need to create a pilot and customize a machine to participate in this game. During the Preseason ("Day 0") period following initial signups, each player should provide me via PM the name of their pilot, the name of their machine, their choice of pilot ability, and machine's stat distribution. Please note that pilots, machines, and their players will be considered publicly usable information that will be used to construct narrations and for returning results.

Pilot abilities enhance one aspect of their race performance. Each player may choose one ability for their pilot from the following list:
Machines have three different attributes, Body, Boost, and Grip: Each stat starts at a minimum level of E and can be upgraded to a maximum of level A with the following progression: {E, D, C, B, A}. When creating a machine, each player may make up to six levels of upgrades. For example, you could have a machine with stat values of ( C, C, C ) or ( E, B, B ).

If a player does not submit a pilot and machine build by the end of signups, one will be generated for the player at random.

Second, players may specify a rival for the race, which marks another player as an attack for the race duration. If a player passes their rival in any sector, the player will perform an attack. The player initiating the attack will lose one place from their sector total, while the target will have a chance to be crashed from the race. If the target does not crash, they will lose a number of places based on the difference in the players' machines' body stats and will have a Disadvantage on their next movement. A player may attack their rival one time per lap; if they do not perform an attack on one lap, that 'charge' carries over to the next lap.

Race Resolution
Each track is divided into a number of sectors, most frequently a number between three and five. Each of these sectors can be of one of three different types:
Races are run across multiple laps (between three and five, depending on the number of sectors), looping over the track's sectors. Within each sector, each player makes a roll for the number of places they will advance up the rankings ("passing points"). The player order is immediately shifted according to the number of passing points, after which the next player's movement will be resolved. The order in which each player makes their roll depends on the order of players going into the sector, starting from the player at the back and ending with the player at the front. If a player would advance past the first or behind the last place, those virtual places are tracked until the end of the sector. At the start of the next sector, any gaps will be removed. 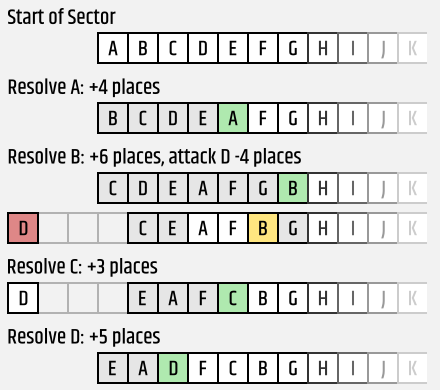 After all laps in the race have been resolved, players score points based on their final positions. The 1st place player always receives 100 points, while the last-place player is guaranteed to score at least 20 points. Any players who crashed during the race will score 0 points. In addition, each player only has two vehicles available for the entire season. If a player loses their second machine before the final race of the game, they are eliminated from the game. In order to win the championship, a player must start each race (but may still be eliminated in the last one).

To determine the initial order for players at the start of a race, qualifying is automatically rolled at the halfway point in each game day. Each player makes one roll for each sector, assuming boost power is active and the machine is following a Balanced tuning. (In other words, there is no player input for qualifying.) The number of passing points across all sectors is totaled up, and the starting order is set from most points to least. Ties are broken randomly.

Additional Charts and Formulas
Each pilot's passing points in each sector is generated from a random draw from a Poisson distribution based on their Speed. Base speed is determined by a player's tuning for the race, with modifiers based on the machine's Boost and Grip.

Attacks made in High-Speed sectors have a x1.1 crash chance multiplier and increase the number of places lost by 1. All pilots have a base 2% chance of crashing when making a move in a Technical sector.

Reminder: Boost Speed only applies to Balanced and High-Speed sectors, and only from the 2nd lap onwards. Grip Speed applies to all laps, but only to Technical sectors.

At race resolution:
Points gained for k-th place = 100 * 5^( (1-k)/(n-1) ), where n is the number of players that started the race. Decimal points are rounded down to the closest whole number.

Once again, the Galactic Space Police are relying on the cooperation and participation of the F-Zero PX circuit pilots to assist their search for possible Crimson Eclipse members, and to prevent them from winning the championship. Vote for the player who you find most suspicious of being a Crimson Eclipse member in bold red with "!vote for <player name>" or similar phrase. You may retract a vote by posting "!retract vote for <player name>" or similar phrase in bold limegreen or change your vote by making another one in bold red. Do not, under any circumstance, edit a post that has a vote. If an edit is necessary, make a new post instead. The player who receives the most votes will be taken into custody by the Galactic Space Police until the conclusion of the championship, and thus will be eliminated from the game. Should there be a tie in the vote, then only the first person to hit the tied value will be eliminated. If a tie at the top is caused by a vote being removed from a player, the player who was previously in first will still be considered to have hit the tied total first. The vote acts first in each day's resolution, before race outcomes and any player actions are resolved.

Sign up with the phrase "I !sign up" or similar phrase in bold limegreen or other bright, easily visible color to ensure that your intent to play is acknowledged. Signups will be closing at earliest on Friday, August 27, 2100 PDT / 2400 EDT / Saturday, August 28, 0400 UTC / 1400 AEST. Depending on signup numbers, there may be a 24-hour or longer extension to the signup period. There is no maximum nor minimum cap for signups for this game.

It is expected that players do at least two of the following three things each day to be considered sufficiently active: make at least two posts, make a vote, submit private actions. A warning will be sent on the first day that this requirement is not met, and a replacement will be made on the second consecutive day of inactivity or third day overall. If there are no replacements available, then the inactive player will be eliminated from the game.

If any players utilize outside messaging services for private communication or conduct interesting conversations including more than two players, please send links for them to the host.