We are all tired, poor, huddled masses yearning to breathe free of this [Election]

Call meSkraggRegistered User regular
April 2016 in Singularity Engine++
Every few years we as a nation come together and elect a leader of the great nation of the United States of America.

Now theres some argument on weather or no what we do actually matters. If the candidates we like even have a chance if they break the party lines, or if we are all just spinning endlessly in a hamster wheel while our corporate overloads watch down upon us from on high.

But who am I to say how it works? I am but a man, and as such I am here to present only the facts about this election cycle so here are the candidates: This is man who loves soup and the GOP. Hes their current big gun that the Republican Party seems to be rallying behind. He is pretty religious and conservative. If elected he has promised a can of Chunky Soup in every cupboard.

Hes rude, hes crude, he speaks his mind, and he hates veterans who didn't win, the poor, Mexicans, people with disabilities, anyone whos Muslim, and people who don't agree that his daughter is hot. He wants to make America great again. What does that mean? Who the hell knows. Not him, hes too busy being the best at elections. 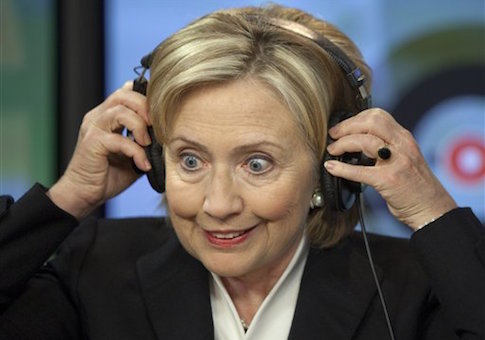 (seen here jamming out to her favorite tunes)
Hillary is the moderate Democrat and appears to be the front runner for the Democratic Party. They love her, your grand parents love her, minorities seem to love her, and her husband...exists. Shes taken heat for everything you can think of from flip flopping opinions to military actions she had little to no involvement in, to just being a woman. She has a strong lead on the party nom right now but she is something of a divisive candidate to some in the party.

Hes the far side of the liberal Democrats. He wasn't always a Democrat, and honestly after this election if he loses he will probably go back to not being one. That being said he wants to fight, for your right, to equal pay and getting money out of politics. He seems to be a man of the people, often mingling and spending time with his supporters. Even if you don't like his policies you gotta admit hes awful friendly!

So yeah thats what were looking at right now. There might be a few surprised down the road but right now that is our 2016 US Presidental Line Up!

Now imagine them all running out onto a stage to this

Ok so, same as last time: Please keep discussion civil and refrain from letting arguments on the internet make your blood boil. Count to 10 and take a deep breath.

joshofalltrades wrote: »
Okay, I'm going to do my best to summarize all of the crazy things that have happened so far in the 2015-2016 Republican Presidential primary races. Just to put it in perspective. I'm going to leave out memes like the Zodiac Killer thing because that's just the Internet being the Internet.

*breaks out the liquor*

You know what? I'm done. I don't even think this is everything. Jesus Christ.