So, here is a dragon:

And here is a dungeon.

They go together a little too well.

As well, this is apparently a gamma.

and this is a world.

And they go pretty great, and give you things like

As well, i want an outlet to post Magic the gathering art, so, we can talk about that too. 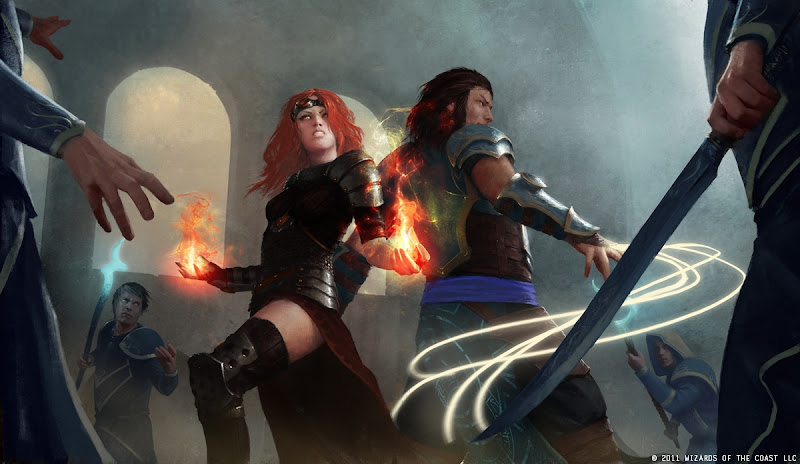 Solar is talking about running a game. Let's Help him to decide to run a game i want to play!

If you want to be on one of these lists make the person in charge know. Not Me. I ain't doing shit about fuck all.

Draw theis and win a prize, maybe.
Before shot:

This is largely the one people seem less interested in doing but i'm writing this anyway, don't have to be but good, but it sells the concept as something more then “bunch monsters working together”

Paladin:
Human male, tall, (lets say 6' foot when everyone else is maybe 5'8), plate armour, but fancier then the fighters, not painted, maybe parts of it are gilded. Wears a big shield on his back,. Not pretty bug better looking then the fighter, hair is kept short there there. Much happier then the fighter.
Is weapons are drawn has a two handed sword but probably would have it in a position to use.

Sorcerer:
Half elf female (means shorter then a human, short pointed ears, narrow face and eyes by human standards), wearing hancyful robes caring an easily identified staff hair is long past the mid back.
About as tall as the fighter, a little bit taller.

Wizard:
Halfling wizard (they're kinda like hobbits, but without the hairy feet) also wearing robes, but are much less, glamourous, and more industrial, maybe they're dirty and torn but they do their job. Carries a large spell book (about the size of his torso) hair is unkept past his shoulders, looks a little mentally unstable.

Cleric:
Male dwarf, hair and beard are kept nicely though both are a bit long, wearing robes and armour over it. Taller then the halfling, shorter then the fighter, buit build like a brick house with broad sholders and so on. Alex knows a lot about dwarves, you can ask him.

Fighter:
Now a giant, standing like 16 feet tall. Looks, surprisingly similar, skin colour is different (we're currently debating what kind of giant, once we figure this out i will update you), armour is pretty much the same, he is basically the same, but bigger, which also seems to displease him.

Paladin:
Nymph woman. Now the shortest, unearthly pretty, ears are pointed like an elf, but the points are longer and taller (i can get a reference pic for this) Now at about 5'4, hair is in more of a pixie cut. IS having some trouble with his old and new nature. Top of the armour is about the same, maybe some kind of symbol on both the before and after so it's clear it's still him, lower armour is armoured skirt (kinda like the greeks are shown to be wearing at times wearing. Kind alike a metal pleated skirt, the front is bit shorter for mobility) and is now wearing thigh high leather boots (slight heel, nothing crazy) and metal grieves over top. Facial expression is a mix of confusion and excitement.
Weapons and sheild unchanged.

Wizard
Male troll. Trolls being tall, bulky green, skin is often a bit warty, big noses, ending in a sudden hook. About 7 or 8 feet tall, built like a tubby truck, hunched over, arms almost able to reach the ground due to hunch and length. Kinda like a gorilla. Not pretty, bug big. Wears a simple robe, somehow grew a wizard's beard and wearing the cone hat for amusement.

Cleric:
Now an angel. Angels are largely genderless, and tall, about as tall as the medusa, slim build, mix of male and female features, like no beard, soft face, broadish shoulders, but slim mid section. Androgynous to the max. With feathered wings. same armour but made to fit, he is less then happy with this new body, but not outwardly angry.
Melding on August 2011
0
«1234567…100»