Dwarf Fortress is a single-player fantasy game. You can control a dwarven outpost or an adventurer in a randomly generated, persistent world. Created by the people up at Bay12 Games, Dwarf Fortress is one of the games that the popular indie hit Minecraft was based upon. 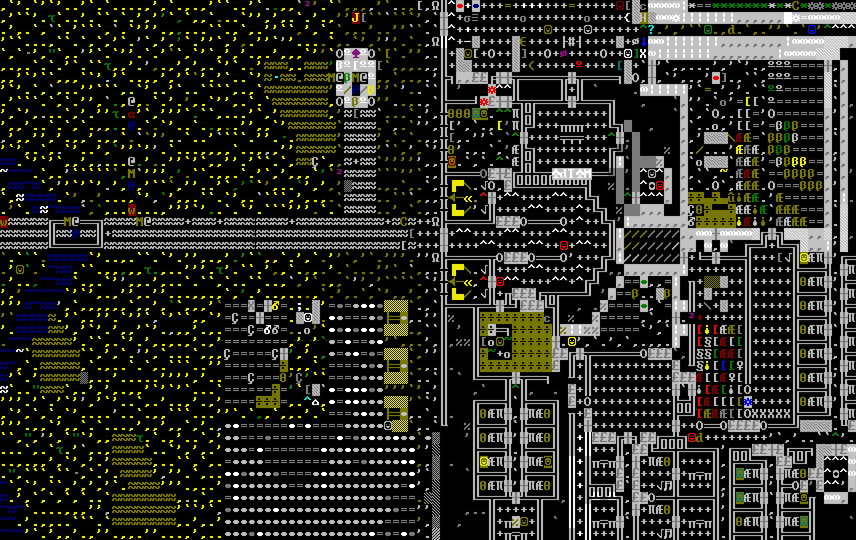 For those having problems downloading/playing the game on Mac OS X Lion:
The problem is in the df launch script (Installed as 'df')

Then your game should run perfectly fine!

New player information:
1) Dwarf Fortress is notorious for its difficult learning curve cliff (thanks @dragonshardz!). Take a look at a screenshot above (spoilered) for what it looks like. If you're still serious about playing it, read on!

3) We Dwarf Fortress players like to call the game DF. The internet shortens everything.

4) Have you opened Dwarf Fortress, created a new world, and have no idea what to do? Read some tutorials, or watch some videos!

5) Not a big fan of the ASCII graphics art-form? You could even take a look at this thread for how to "de-uglify" your fort.

6) Keys to use when playing Dwarf Fortress (copied and pasted from the old DF thread):
Pressing the following keys will bring up a yellow X cursor which you control using the arrow keys. It's a good idea to use the keypad to move the cursor around, as it's generally more comfortable for most players.

Q - Assigns orders at workshops and structures, or used to create rooms from a placed structure, like tables, beds, archery targets, etc, or to destroy them.
R - Battle Reports! The fun (and biting) really happens here.
T - Mainly useful for examining the contents of a building or structure, to see how cluttered a workshop is or what it's built out of.
V - Examines an individual dwarf, where you can look at their stats, gear, thoughts and alter their job list.
K - If you'd like to see if that U is an attacking Unicorn or a friendly hUman trader, this is the key you want. It basically lets you examine the contents of a tile. Pressing enter examines objects in greater detail, if any is available.
D - Designates an area for tasks. Hit enter to start dragging out a rectangle, enter to stop. Or hold down the mouse button and draw it in. Everything in this area will now be designated for whatever task you had selected, from Digging out rock, cutting down trees, or picking plants, or whatever else it might have been. Use this to dig out your dwarf-hole.
Z - Brings up your fortress report and tells you how depressingly low you are on food.
U - displays a list of all units on the map, along with current job. Useful for finding idlers and wild animals
< and > - Change the level displayed by one (up and down, respectively). Since you'll be using these a lot, it might be wise to remap the keys (I use / and * on the keypad). To do this, press ESC and use the "Key Bindings" option ("move/view cursor up (Z)" and "down (Z)" )

furlion wrote:
DF Hack can be found here on the DF forums. And here on github in case a new thread is made or it moves. There are a ton of useful tools in there to help make the game a lot more user friendly. Some of them are as the name suggests hacks or cheats but others just make the game more fun in my opinion.

Dwarf Therapist is a must use tool for any large fortress project. Here is the main page for it, I do not think it has a dedicated thread on the forums. DT lets you easily keep track of your dwarfs skills,personalities,happiness, and pretty much all of the traits any individual dwarf can have. Incredibly helpful.

I use the Mayday tile set from Mike Mayday available from his personal website http://mayday.w.staszic.waw.pl/df.php. Hope these help!