Registered User regular
March 2018 edited March 2018 in Games and Technology
A 1-4 player co-op game wherein you play as part of a crew of Dwarves shot from space in a drill-headed dropship into the procedurally generated, Bug filled caverns of a hostile world, in search of resources and credits! 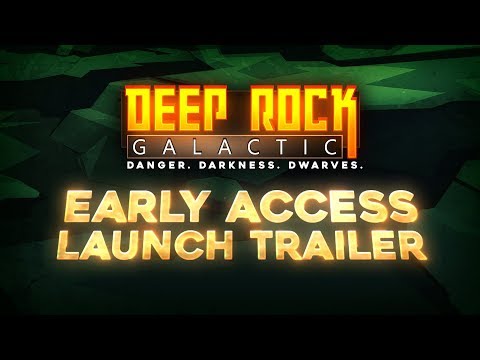 There are four classes: The Gunner, the Driller, the Scout and the Engineer. Each with their own guns and gadgets that help them and their team navigate terrain and fight.

Your missions consist of gathering a specific type of resource (as well as a second resource you can gather to get a bonus). Along the way there are resources like Nitra that will allow you to call in supply drops and Gold that will give you extra credits on mission completion. You'll be accosted by waves of various face eating Bug monsters that don't take kindly to dwarfy types messing around in their nice caverns.

The caverns themselves are completely destructible, allowing you freedom to mine your way up slopes and around drops.

Between missions you can use the credits and resources you obtain to upgrade the various classes gear, as well as buying vanity items to change your looks.

It's currently Early Access, but so far I've been having a lot of fun with it and there seem to be a decent number of people to play with. You can play the missions solo, and you get a little hovering robo pal to help you out but I haven't spent much time doing that myself. It's out for Steam and Xbox currently.